Bakugan Battle Brawlers is about playing a childrens card game to save the world by throwing spherical monsters at each other. Surprisingly fun for a licensed game.

In the game's internal list, there is space for every Bakugan that had appeared in the series thus far to be present. Unfortunately, in the final game, many of these were cut, with no remnants left at all besides their empty IDs. There are a handful that survived in some form, however:

Terrorclaw normally comes in every element except for Ventus, but it does have textures for Ventus in ball form. In battle it re-uses its Aquos appearance, however, and there are no UI elements associated. 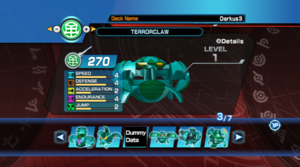 Warius was only ever officially released in Pyrus, but there exists fully functional variants of Aquos and Darkus Warius; notably, these lack the distinctive reflectiveness of the Pyrus one.

Naga appears in the game as one of the main villains, but remains unplayable. Despite that, he exists in the game's files as an (almost) fully usable Bakugan! His ball form is re-used from Dragonoid, but in battle he has a unique model and animations. Unfortunately, if you win while using him, the game will crash due to a lack of an attack effect. 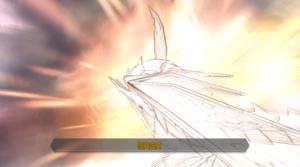 Preyas has a unique mechanic where he can change his element during battles to either Subterra or Darkus, from his base form of Aquos. You can never acquire these different elements of Preyas in your Bakugan collection, however. Despite this, he has full textures, UI files, and even unique stats for these two elements, clocking in at 400 G-Power (as opposed to Preyas' normal G-Power of 340).

The Bakugan Reaper is internally grouped with the non-Brawler Guardian Bakugan, implying it was originally meant to be Shuji's Guardian Bakugan, as in the show; but these plans were apparently cut at some point in development, and it was turned into a regular Bakugan many characters use in different attributes. Bizarrely, Shuji doesn't even use Reaper in the game at all.

Immediately following Naga in the Bakugan model list are several duplicates of the Guardian Bakugan from the Battle Brawlers. In addition, when viewing a Guardian Bakugan that belongs to a Brawler from your own inventory, it has different associated images, depicting slight changes to the design, such as Dragonoid lacking his horn, and having slightly distinguished descriptions. Despite this, and the ball models having duplicates as well, the ball models have no distinguishing features, including things such as Dragonoid's horn. Battle models do retain the changes, however.

Alice features as a character in the game, but never participates in any battles. Despite this, she has a full Brawler description (only normally used when previewing opponents in tournaments) that goes unused in the files. It reads as follows:

Notably, the Toys R Us version only existed for the Wii version, leaving Ravenoid and Manion completely unused in the PS2, PS3, and Xbox 360 versions of the game.

In addition, in any version besides the Toys R Us version, if you input the code 44982493 when naming your character, you will unlock a special Bakugan, a bronze Pyrus Warius.

Despite these exclusivities, all these Bakugan exist in every version of the game, and can be cheated in.