Like the Genesis version, but with a theme song featuring women moaning presumably in pleasure. And it was brought over to Japan by the same people who brought us Toilet Kids.

Three characters that appear as Lamprey's transformations have unused appearances on the character selection screen.

The following Action Replay code can be used to access them:

Present at 0xF6 in the ROM.

The main menu for the Japanese version adds its own title, which is not just a direct translation as "fighting" was added, making it "3D Fighting Ballz" (3次元格闘ボールズ). Strangely enough, the radical used in the 闘 kanji is the Chinese simplified form of it. It also adds a copyright notice for said version's publishers, as the logos for Accolade, Cave Logic and PF Magic remain identical to the US version complete with "Licensed by Nintendo" text. 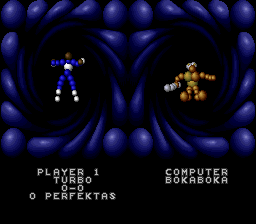 This version also adds a "One Player Free Play" option, which is essentially a 1P vs. CPU mode. This mode, under the same name, would also be seen on the 3DO version, Ballz: The Director's Cut, in both the US and Japanese versions.

Some of the characters had their names changed for this version, presumably to make them more acceptable for the Japanese audience. These changed names were also kept on the Japanese version of The Director's Cut, although it oddly misspells Tsunami's/Gohriki's name as Gorhiki.