BaseWars is a futuristic robot baseball game by Konami. 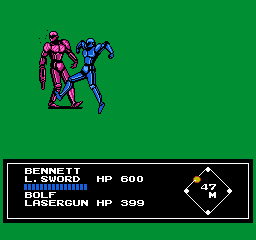 In addition to the standard CYBORG, TANK, MCYCLE, and FLYBOT, there is a fifth, seemingly unused type, called "BY YCLE" (bicycle?). It is completely invisible in the overhead view, and varies in appearance everywhere else. Robots of this type seem to be incredibly overpowered, frequently hitting home runs and decimating opponents in fights (at least when the CPU is in control).

Several parts of the game code have checks in place to prevent you from choosing this robot type, so it was clearly a valid choice at some point. Was it used during testing?

To enable this, change ROM addresses 0x8F47 to 04 and 0x8F8B to C0, then choose Team Edit from the main menu. You should now be able to select the BY YCLE type.