Inside the cheats section of the game, there is four hidden cheats, only two of which have proper cheat names. They can be inputted with some GameShark trickery. The two cheat strings that can be inputted are "??????????" and "DUMMYHAHA". However, there is no letters "A", "?" and "U" in the input code screen. There are codes to force the game to display the letters (found in each code's own section).

This GameShark code replaces the letter "C" with "?". The spot where "C" once was will be blank, but the game will still recognize it as "?". Input ten question marks to enable this cheat. The "?" will be blank when inputting them as well, but ten is the maximum amount of letters it will accept anyway. 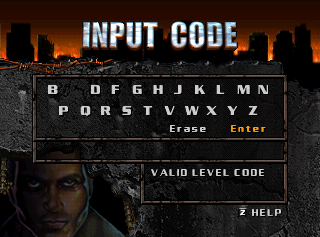 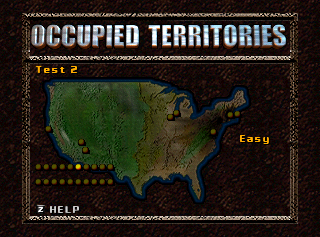 When inputting this code you will be rewarded with the cheat, "TOD CHEAT", granting you invincibility, unlimited ammo, automatic radar at the start of each match, and level select (for campaign mode). Neat!

You can replace "B" and "Z" with "A" and "U" using the following GameShark code, allowing you to input the code DUMMYHAHA: 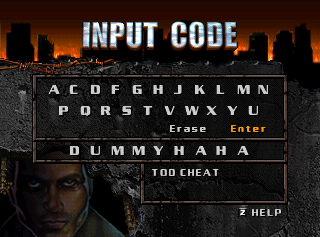 These two cheats have no proper name/input, so they can only be enabled through GameShark codes.

One cheat disables the HUD and you can no longer properly see the pause menu. It does not refer to any cheat text at all. Enable this with the following GameShark code:

The other cheat allows you to always have radar at the start of each match. It is also enabled when you use the DUMMYHAHA cheat. It could have been its own cheat at one point. Enable this with the following GameShark code:

When you spawn in most of these unused levels you will get stuck inside a clump of tanks. Apply the following GameShark code to disable collisions for Player 1 to properly explore these maps:

To enter one of these levels, apply its corresponding GameShark code then enter a single player or multiplayer map that is not under "Campaign" to play them.

This level has a couple of hidden pickups in it. Use the code below to enter the level:

It appears Crimson Gate was once going to be a multiplayer map, even having proper spawn points for each team. The map is quite cramped however, likely contributing to it being cut for multiplayer. You can enter this level by activating the following GameShark code: 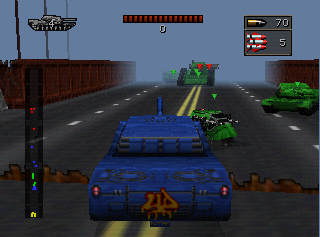 A test level resembling one of the unplayable cutscene "levels". You can enter it by activating the following GameShark code:

Appears to be a half finished version of Lake Shore Drive. You can enter this level by activating the following GameShark code:

The other two unused weapons, while non-functional, can still be put in your inventory with this code:

Two unused pickups, "FLAMER" (no function) and "SMOKESCREEN" (creates a smokescreen, similar to the weapon variant), can be found within the game's code. "FLAMER" most likely appeared later in BattleTanx: Global Assault. It's unclear what "SMOKESCREEN" would have been used for.

You can apply the following code to see them in game, though they will only work on the Intro Level. This code replaces the four nukes found in that map.

A rather plain song not used anywhere in the game can be found left in the code.

Function 0x8007c864 appears to be an unused main menu. There is no longer any code in the game that makes use of this function. The below text would have been used by this function.