Battle of the Eras

Battle of the Eras is a fighting game with the distinction of having managed to sell 0 copies once it was released, along with being Procryon's only game released. The game is notably buggy, with a lot of unintentional methods of closing the game, slow menus, and an insane amount of input buffering done on every single screen.

Oh yeah, and it looks terrible too. 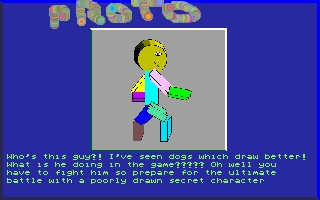 PROTO is a secret character, though only semi-unused, as he can be fought in Arcade mode by pressing Space before the first match begins. He is also selectable in Versus mode, but only by Player 2, and even then the game will crash before the match loads due to missing sound files.

When fought in Arcade mode, he uses sounds normally reserved for the Minotaur.

DAT1.DAT and DAT2.DAT are actually GIF files and are never used by the game.

A theme meant to play when a character's ending is displayed. Due to file corruption, the game will crash upon attempting to load this. This is a reconstruction from splicing instrument data and pattern data onto another working DKM file. The file name of the original song labels this track "VICTORY!"

An unused pattern in PROTO's stage music. It's a duplicate of another pattern that has less instruments used and also a slower tempo.

Two unused patterns in XLX-2250's stage music. These are numbered before the used patterns, a strange omission considering that most of the game's soundtrack has incredibly long intro segments for stage themes overall.

A series of strings in the game's executable. If either beras.exe or battle.exe are launched with the switch -t and one of the above messages afterwards, it displays the first message from the following set: