Beetle Adventure Racing is a race between grossly oversized beetles that look almost like cars. And they act like cars, too!

Using the code will enable a rather comprehensive debugging system. Pressing Down on the D-Pad anywhere outside of actual gameplay (i.e. a race or demo mode) will bring up a title bar near the top of the screen, as well as a mouse cursor that's controlled using the analog stick. The title bar caption interestingly enough reads "NEED FOR SPEED", implying that the game started life as a Nintendo 64 entry in the Need for Speed series.

Hovering said mouse cursor over the title bar brings up a selection of seven different menus. 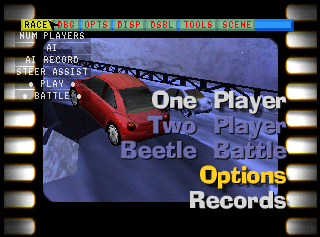 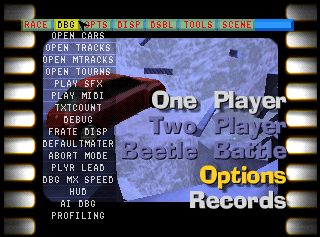 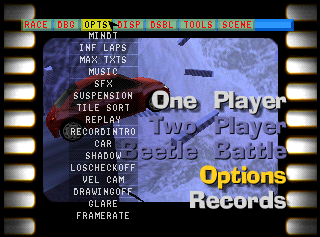 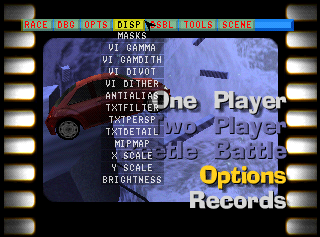 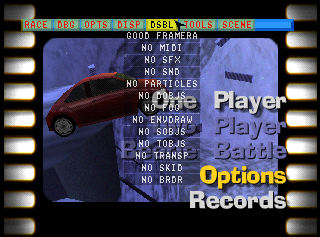 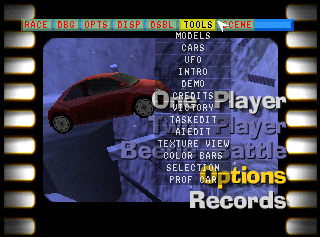 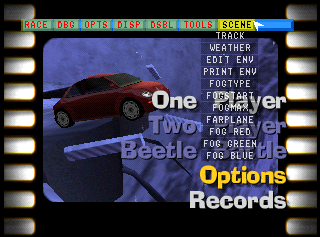 The Rest of the Debug Menus

These are the rest of the debug menus in the Debug Menu.

The camera controls for the different model viewers, etc. are as follows:

Hold down the L Trigger to speed up camera movement.

Alternatively, some of the data display options can be toggled using the following codes, which will make a bunch of miscellaneous data show up on the right side of the screen: 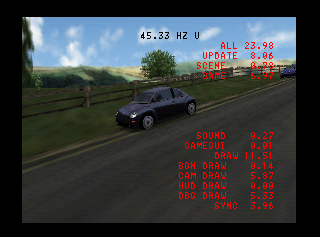 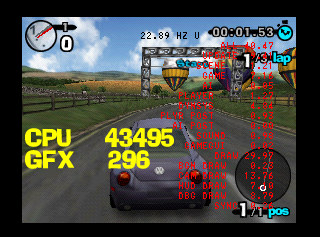 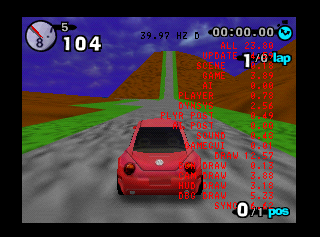 Contains nothing more than a single road going off into the nothingness. The collision doesn't seem to match up with the level, so you'll most often be driving in the air. 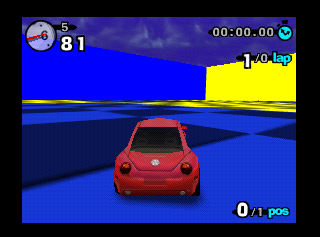 A simple test level that is checkered blue and yellow. 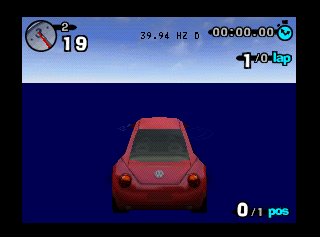 As is evident in the preview, this is supposed to be another test level... but as the starting position makes you end up right above the water, there's no way to explore it. 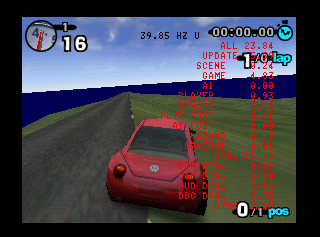 A level consisting of a donut-shaped island with a road going around it. The elevation drops immediately to the left but only smoothly to the right of the road, so this may have been intended to test jumping physics and such.

Some of the sequenced music tracks from the game contain unused audio files. Unfortunately, there is no MIDI data that corresponds with these samples, so it is unknown how they were used exactly. That being said, there are some redundant sounds that are leftover isolated instruments. In several instances, multiple instruments were mixed down into one audio file. It is presumed that this was done for optimization thus reducing the amount of audio samples and MIDI events needed for each track.

Each track in the game uses a MIDI Percussion track for drum loops and various percussion sounds.

This sample is very interesting as it is the isolated drum loop for Mount Mayhem. The drum loop that is heard in-game is actually from two downmixed samples (one with the bassline and the other with the guitar). Also interesting to note, this sped up drum loop was taken from the 1982 song "Outstanding" by The Gap Band.

The remaining other samples in the percussion bank are miscellaneous cymbals and snares.

Instead of the Volkswagen Beetles that the rest of the world got, Australia got Holden HSVs.

The differences extend further than a re-skin; the speed of the cars has been increased to be more appropriate for HSVs. For example, an HSV in the same class as a Beetle with a top speed of 168 km/h will have a top speed of 230 km/h.

The Australian version had all the narration re-recorded by an Australian. It also changes the greeting on the main menu from 'Welcome' to 'G'day'.

The speed unit and language selectors were removed, allowing only km/h and English. Also, the options were re-aligned in the Australian version.

Each game shows a logo with trademark information about the licensed brand.

The title screen of the Australian version changes the Beetle to a Mobil1 branded HSV Commodore. It also changes some minor details, such as increased shine under the vehicles, and additional width of the 'film's' sprocket holes being drawn.

There is also some text stored at 0x217E8 not present in the North American or European versions that does not appear under normal circumstances, as the game can run in any PAL N64 and won't boot at all in an NTSC N64.