Run around jumping into random bushes to find statically-placed OoPARTs that can be used to bait misplaced historical figures into going back to their own time in this terrible RNG-fest from Rocket Science (one of only two NES games they developed). 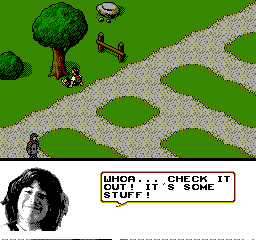 Entering 019B:10 and getting the Historical Bait near the horse in Level 1 will display this otherwise-unused bit of text and give you a set of Historical Bait instead of just one. 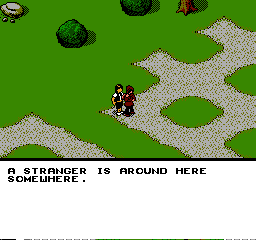 Entering 03BC:10 will set the historical figure to "a stranger", who has the appearance of Rufus (intended for Bill instead of Ted). This character cannot be satisfied and will reject all Historical Bait, rendering the level impossible to complete.