Bio Miracle Bokutte Upa was initially a Japan-only NES game until America and Europe got to play it through the Wii Virtual Console in 2008. 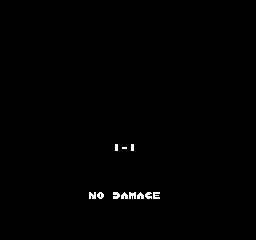 A message reading "NO DAMAGE" will appear at the stage number screen if you set RAM address value 0x1C to 1. While the message would appear to imply an invincibility mode, the only thing it seems to do is keep you from being able to pause. 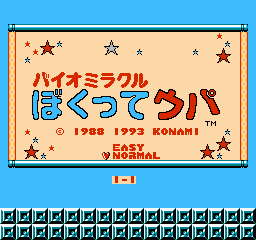 The first obvious change is the difficulty setting added to the Famicom release. When you press Start you can adjust the difficulty, while on the FDS you start your game. On easy mode you start with 3 health and 4 lives while normal mode starts you off with only 2 health and 2 lives. Also enemy damage is reduced in easy mode. The normal difficulty is equivalent to the FDS version's difficulty.

In the Famicom release, the Konami logo was removed and added three stars, one being discolored. The original FDS release had an animation of Baby Upa dropping down onto the title logo and hopping on it before resting on top of it. However, in the Famicom rerelease, Baby Upa was also removed from next to the title. The removed graphics still remain in the ROM, though.

The Famicom release starts off with this logo instead of a loading message.

The FDS release has some nicer quality music since it uses the system's wavetable sound channel. The Famicom release remixed some tracks to compensate for this.

However, rather than just removing the expanded FDS audio and leaving it like that (ala Mr. Gimmick! by Sunsoft), the sound designers in charge of the Famicom port chose to entirely rework and remix the soundtrack, adding new percussion and drum samples along with updating the audio with newer techniques since the original release to compensate for the removed FDS audio.

In addition, some tracks were further altered by having their melodies lowered.

Although none of the sound effects in the original version used the extra wavetable channel in the FDS, some sound effects were also updated in the Famicom rerelease. One example is the Konami pause chime, which was changed from 4 notes to 6 notes, similar to the start chime in Life Force when you start the game, and also sped up as well.

The credits differ between the original 1988 FDS release and the 1993 Famicom rerelease. By the time the game was rereleased some employees had already left Konami, so the newer credits reflect this, particularly for "Sound Design".

For whatever reason, the "Visual Design" credits were removed entirely in the Famicom version.