The Master System Hokuto no Ken is an adaptation of the manga. Due to said manga being relatively unknown outside of Japan at this point, the international release changed the main character to a generic martial artist with superpowers. 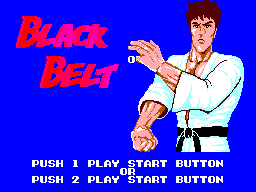 Both title screens are animated, but the Hokuto no Ken one has lightning flashing in the background whereas the Black Belt one just color-cycles the logo.

Both games have different music for some scenes.