A Break-Out style game with bonus power-ups that change the game experience for the better or for the worse. It also has a level editor.

The game's data file "ball.glo" contains the following images which remain unused in the final game:

The old title under which the game was developed reads "BibleBall". Since RockSolid Software developed "games for christians" (as stated in their other game Adventures with Chickens), this game was also planned to show some Bible verses at the start of each level (s. below for some verses which remain in the data file but are never seen). This is also reflected by the filename of the background image for the "Hall of Scores", which is called "halloffaith.png", and the corresponding game state class named "faithC". The new logo has the filename "bibleball.png", without the c.

User interface parts which were probably meant to be used for a level selection list in the editor and a scrollbar needed for such a list. However, the final editor only contains a textbox in which the level name can be entered.

This music is never played. It could have been used as an "Excellent!" screen showing when the player finished all 40 levels - like in Adventures with Chickens which also used a short flourish after all levels were completed.

This sound is never used in-game. Judging from the file name, it may have been planned to be played right after the paddle-eating chomp teeth start moving from the left.

This plain text file contains three quotes from the New Testament. Verses from the Bible are used in RockSolid Software's game Adventures with Chickens and shown every time a level starts. This was probably planned to happen in this game too.

The original doesn't have a line break after the comma, but one has been added for viewing purposes. 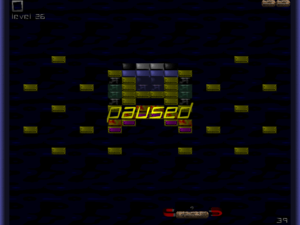 The game features a leftover pause screen similar to the one available in the other RockSolid game Adventures With Chickens. It is almost fully removed in favor of returning to the main menu to pause the game with Escape, but can be inconveniently accessed by hitting Ctrl and Numlock once at the exact same time. The otherwise unused "paused" sprite with cut off letters will appear above a darkened screen and the music pauses. Erroneously, the music does not resume playback when leaving this screen with Escape or Enter, but will resume immediately if minimizing and restoring the game.

In the main directory is a file called bt.ini where the game settings are stored. Some of these cannot be changed in-game, but by editing the settings file directly.

Changing "gsilence" from "off" to "on" allows the player to play the game without any music or sound. This was used internally by the game if it couldn't start up often enough (it also counts the number of game starts in "runcount" and the success in "runsuccess") - and then asks the player to disable sound output if that could be the problem.

Changing "gshowframerate" from "off" to "on" will make the game show the frame rate at the bottom-right corner of the screen. The frame rate displayed is actually one too less, as the game optimally runs at 40 FPS, but only displays "39".

When a ball hits the paddle, a hit zone is calculated which determines the new direction the ball will move afterwards. In case of a miscalculation, "Zone: %n" will be written to the game's log file (log.txt) and the game closed, where %n is replaced with the erroneously computed hit zone number. This does not happen in the release as the calculation works correctly.

The in-game editor does not allow editing the top and bottom most rows of bricks to avoid bricks being placed over the game score and life display or creation of weird levels with bricks in the height of or under the paddle. However, the level files can be opened inside a hex editor and these rows can be filled with any bricks.

This even allows bricks to be placed which are not available in the in-game level editor, as every brick ID is encoded with 8 bits, resulting in 256 different bricks (yet the game provides only 64 "real ones"). 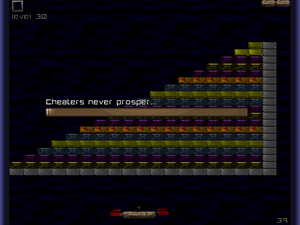 During a game, pressing Alt+H will bring up a textbox (displaying a title "Cheaters never prosper...") where the player can enter codes and submit them with Enter. Two of them provide additional level select and level state manipulation features, beyond the possibility to select any level to start with from the main menu; others might have also been used for debugging as they basically apply the effect of power-ups.

The first release of the game, with the publisher still being named RomTech.

Even though the version number suggests that functionality or code has been fixed, there does not seem to be a noticeable technical change anywhere.

The only difference to version 1.0 reflects the name change of RomTech to eGames, which is clearly seen in the splash screen of the game, stating an updated copyright and website. It looks like that the splash screen has been edited quickly, color quality is lost as if the original color palette has not been kept when updating the texts.

A shareware version called Special Edition was released, containing only 10 of the 40 levels and no loading and saving possibility in the game editor. There seems to be only one Special Edition which is based on the 1.1 version.

Technically, all 40 levels are present in the game's data file, but a changed constant in the game's code limits it to access only the first 10 levels everywhere. This includes triggering the ending sequence after finishing only 10 levels as well.

The Load and Save buttons in the Level Editor are also present, but not drawn; the code to open the dialog for loading and saving is not included. However, the dialog and file handling code itself is still present.

Finally, the last outro screen was changed to an order advice on the "Premium" full version of the game.

Newer shareware releases pack the game inside a typical time-bomb container, which allows the game to be played only for 60 minutes. The game itself is a fully functional 1.1 version, with all features available, and can be unlocked by purchasing the game from the publisher.