A 1991 Japan-only RPG with an unreleased US proto and a 2011 unlicensed English version. 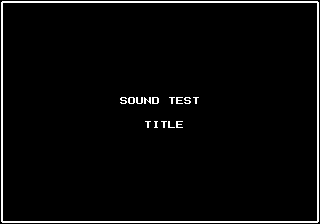 In either the Japanese version or the unlicensed international release, create a new save, then press A + B + C + Start (Start must be pressed last) on the name entry screen instead of just Start. This will open a sound test (more of a music test, as it doesn't have SFX). The international version adds an "End" button to the entry screen, which performs the same function as pressing Start, so holding B + C then pressing A over "End" will also work.

The sound test controls are somewhat restricted: the only button that does anything is Start, which advances to the next song. After the last song in the list, the game goes back to the first song, meaning the only way to leave this screen is by resetting. In the international release, the game will sometimes crash as soon as the sound test is loaded; perhaps an indication that Super Fighter Team were not aware of this function and unknowingly broke it.

Skip to the End

A similar code to the above will skip the player to the final scene and credits in both versions. On the name entry screen, enter the name ABAI, then press A + B + C + Start (the international version's "End" button will not work for this function). Note that the B button erases one character, so it may help to select I then press and hold A, B and C in sequence, then Start. This will place, erase and place the final "I" again, ensuring that the code will work.

The screen will fade out as usual, but return with the ending cutscene, followed by the game's credits. The game credits "A B Y" for "MAIN PROGRAM", so it's likely this is the person to whom "ABAI" refers.