Bob the Eyeball 2 is a two-dimensional side-scrolling platform game made with Game Maker 8.1 Pro. By decompiling the game, you can view all of the content that rests inside the .gm81 file. 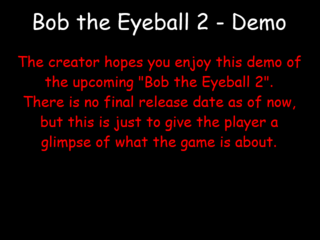 This would have presumably shown up instead of the main menu when launching the game. It also has separate subimages for French and Italian. 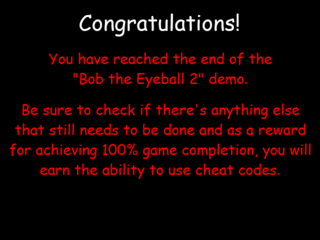 A congratulatory message that would appear when completing the demo. In the final version of the game, however, cheat codes are unlocked from the very beginning, rather than being a reward for achieving 100% game completion. Like the former, this sprite also has separate subimages for French and Italian.