Tapped to star is the black marble from the studio's Oxyd franchise. Industry buzz predicts the lead, opposite bricks and a paddle, will be the marble's breakout role.

The Mac version wasn't ready to ship when the hybrid CD was mastered, so that side of the disc contains Mac-formatted game data and documentation—plus demos of other products—but no Bolo executable. In its place is an empty folder called Bolo™ (Not available yet!).

The finished Mac app shipped on a floppy disk, which came bundled with the unchanged CD containing its graphics and music. 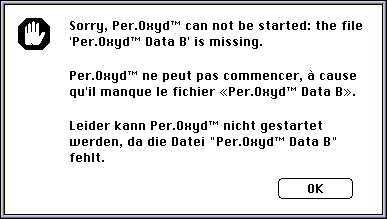 Unlike the Oxyd game it borrowed resources from, Bolo only needed a single "Data" file. This message concerning a second was therefore left untouched in the Mac version's resource fork.