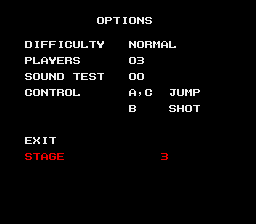 Game Genie code AY8A-AAE2 AY8A-AADL will add a level select to the bottom of the options menu by highlighting Exit and pressing Down.

The storyline was also changed between versions. In the Japanese version of the game, the Brothers are thieves who are out to steal the treasures for their own gain. In the Western versions of the game, the two are testers for a security system and making your way through the levels is the method of testing this system (presumably made up of guards and dogs). The game's opening was changed to reflect this.