Bonze: An antiquated English name for a Buddhist monk, now commonly referred to as a bhikku.
Adventure: Adventure. 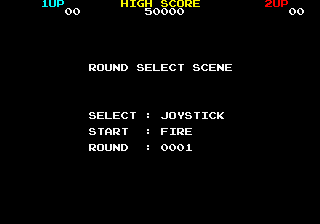 To activate a round select feature, hold the Service Coin button until a "SERVICE SW FAILED" message pops up on the screen. Then, press 1P Start (x3), Service Coin, 1P Start. Start a new game and the round select menu should pop up.

This method is identical to the one used on games that run on Taito's The NewZealand Story hardware and Cadash. 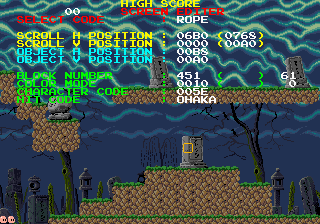 At one point, flipping Dip Switch B8 gave access to a screen editor after starting a new game. This has been disabled in the code by just skipping that check entirely, but putting the following code in MAME's bonzeadv.xml (or any of the derived sets') cheat file and enabling it will fix that.

Unfortunately, even after fixing that check, it's more of a screen viewer than an editor. The "Select Code" variable, which would be used to set block properties (Solid, lava, ice, etc.) is broken, and can no longer be controlled by the player. Plus, at this point, it's no longer possible to actually edit anything. Still, it's something, right?

There's additional text for the screen editor at 0x11A55 that's no longer referenced anywhere in the code: 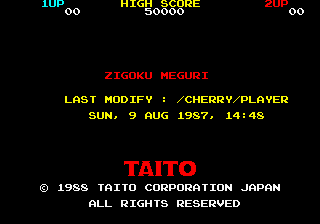 Placeholder title text with the game's Japanese name (and a last modified date) can be activated through the following bonzeadv.xml cheat code: 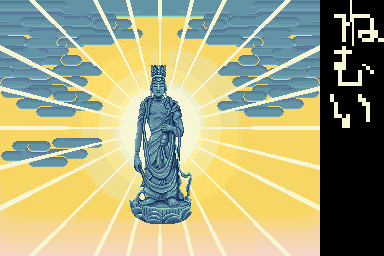 There's a hidden hiragana message to the right of the ending screen message. This is outside of the game's viewing area, and can only be seen in MAME's tilemap viewer.

In the old version of Bonze's Adventure (bonzeadvo in MAME), the game doesn't always properly reset the bit that tracks when the player is crouching. Since crouching and pressing Button 1 uses the player's magic, this is a bit of a problem.

This was fixed in later versions by resetting that bit every frame.