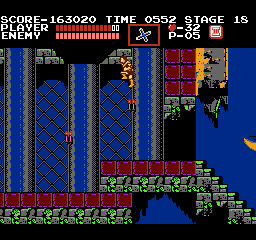 There's a glitch present which can trigger an invisible staircase right before you meet Dracula. It appears that you are somehow able to "catch" the stairs a few pixels off on the screen below, which ultimately results in Simon walking up an invisible staircase into a screen of glitchy graphics. This bug was fixed for the cartridge-based versions. Later games, such as Super Castlevania IV and Akumajou Dracula X: Chi no Rondo, would pay tribute to this glitch with invisible or hidden stairs leading to secret rooms or bonuses. 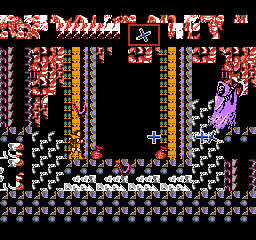 Due to a simple oversight during the FDS to NES cartridge conversion, revision 0 of the game may crash in areas with lots of sprites, such as stage 15 (particularly the hallway below Death's chamber, and the battle with Death himself).

Normally when a non-maskable interrupt (NMI) is triggered at the end of a frame, ROM bank 0 is loaded at $8000-$BFFF, which contains some routines that are run during an NMI. However, if an NMI hits while the game is doing lots of sprite calculations, ROM bank 6 may be loaded instead; as a result, the game eventually jumps into the middle of the wrong routine and overwrites a large portion of RAM with garbage.

Revision 1 fixes this problem by swapping in bank 0 before attempting to jump to the offending routine.

The initial release of Castlevania Anniversary Collection mistakenly uses the Revision 0 ROM which has the aforementioned NMI glitch still intact. 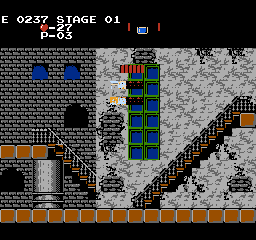 Entering a door while under the effects of an invisibility potion can cause the game to crash in a similar manner to the "NMI crash" explained above. If the potion starts to wear off (RAM address $5B changes to $40) as Simon is passing through the door, the game attempts to jump to code in the switchable ROM area while the wrong bank is loaded, causing the CPU to hang on an invalid opcode. It's currently unclear why the crash only happens under these specific circumstances.

Interestingly, due to some code being moved around, the bug does not cause a crash in the Japanese cartridge release, though it will often spawn an invisible, glitchy solid object somewhere on the screen after the door transition.

When Simon is falling into stage 10, the dropping sound starts a few frames before he appears on the screen. This was fixed in Revision 1 by moving the code that plays the sound ahead in the program.

If you let the first two demos play and then skip the third one and begin playing, there will be no music. The effect disappears if you die or reach the boss. 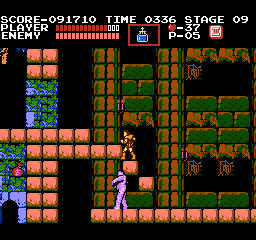 At the end of stage 9, right before the Mummy fight, pushing left against the block shown in the screenshot for several seconds will reveal a hidden money bag. Unfortunately, it is placed several blocks lower than it should be, and cannot be obtained. 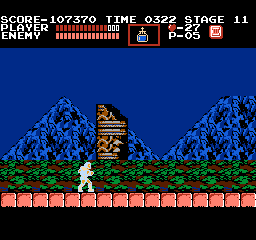 At the end of the underground area of stage 10, touching the stairs while under the effects of an invisibility potion will cause Simon to retain his light blue outline in stage 11. The effect will last until Simon either dies or touches the orb at the end of the stage. 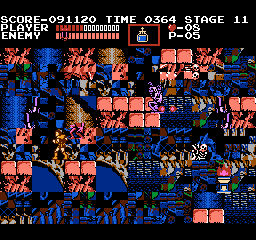 At the end of the underground area of stage 10, it's possible for Simon to get pushed upwards through the platform below the stairs by hitting a bat at the peak of his jump. When this happens, touching the stairs will cause the stage transition to fail (the stair-climbing animation expects a specific RAM variable to be set to #$00 to work properly; this variable is set to #$FF and not cleared at the end of Simon's hitstun animation). In the FDS and Japanese cartridge versions, this will freeze the game at a black screen; in the US cartridge versions, however, this will dump Simon in a glitched room with several sprites. Dying here will cause him to respawn in the correct area. Jumping or whipping before touching the stairs will allow the transition to proceed normally, as this resets the offending RAM variable that causes it to fail.

The spinning Moai Head bonus item found in the second loop of the game has a broken animation; the two halves of the sideways-facing sprite are squished together.