The game has a pretty big oversight in that when entering a mode, certain flags are set to change the behaviour of certain objects and other things. However, when exiting the mode, the flags are never reset, causing the changed behaviour to carry over to other modes. There are a few different things you can do with this bug:

In VS mode, nametags of players are only drawn when they are a certain distance to you, if they are too far then they will not be drawn to the screen. However, in Battle mode, the nametag draw distance will be greatly extended. If you enter a Battle, quit and then enter a VS Race, the nametags will be drawn as if it was a Battle. Which can help when playing competitively.

In VS mode, when an opponent is using a powerful item (like a Star or a Mega Mushroom) and the player is at a certain distance farther away (enough so that the loud sound variant doesn't play and the warning icon does not appear), then if said player looks back, a quiet variant of the warning sound can be heard. In Battle mode, the distance between the player and the opponent needed for this to happen will greatly increase. If you enter a Battle, quit and then enter a VS Race, this characteristic will be present there aswell.

The Giant Pokey on Thwomp Desert tournament actually sets flags that changes how the sand physics work, and it no longer constantly pulls you inward. If you play this competition and then go play Battle mode, the changed physics will carry over. This is particularly problematic for online play, as it could give quite a huge advantage. Luckily this glitch could only be performed when the Giant Pokey tournament was the one currently running.

If you enter a Team VS Race while on the Blue Team, then exit and go to a solo VS Race, your Fake Item Box will retain its blue color from the Team Mode. This is purely a visual bug and the item is still able to hit everyone in the race. 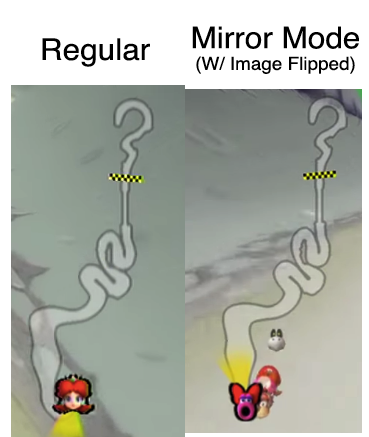 Mario Kart Wii has a problem with the algorithm that rotates the startline on the minimap, where it will mirror incorrectly if the startline is at an angle that is not 90, 180, or 270 degrees. Every track has the startline rotated to one of these angles except for GCN DK Mountain, where you can see how the startline is misplaced. 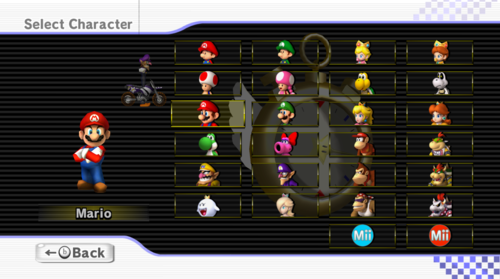 When challenging a time trial ghost to a race (for instance, by challenging it on the Time Trial Rankings screen inside the Mario Kart Channel), the ghost character and vehicle will appear on the upper left part of the screen. On the first frame the character appears, said character will be in a T-Pose.

There is a programming mistake in the code of the game that results in the Miis being assigned the wrong stats. More specifically:

Loading the unused Mii Outfit C shows a slightly different result: the male Miis using the outfit would follow this behaviour, while the females would follow a separate pattern: small & medium would use their correct stats while large would use Rosalina's.

The way the game determines the stats slot to use for the Miis is by taking the slot for Small Mii (0x18) and adding either 0, 1 or 2 (depending if the Mii is small, medium or large respectively) to that number. This way, the value obtained can be either 0x18, 0x19 or 0x1A (the stats slots for small, medium and large Miis respectively). However, the instruction that does said operation in the code (located at 0x80592160 in RAM, PAL) mistakenly assigns the slot for Small Mii as 0x17, hence the values obtained for each Mii weight are actually either 0x17, 0x18 or 0x19 (the stats slots for Rosalina, small and medium Miis respectively).

In the case of Mii Outfit C, the game mistakenly assigns small, medium and large Miis as if they were medium, large and small respectively. This can be seen when the instruction at 0x80592148 (PAL) is executed: the result of the operation (stored in register r4) is 1, 2 and 0 for each of the Mii weights. Similarly to what was mentioned above, this instruction at 0x80592140 (PAL) operates with the immediate value of 0x17. Changing said value to 0x18 will fix the issue for Mii Outfit C, although the instruction mentioned in the paragraph above also has to be changed in order to fully fix the bug.

The following codes can be used to fix these oversights and play with the "intended" stats, including the unused Large Mii stats:

In 3/4 player Local Multiplayer, if 2 or more players select a Mii with the same favourite color, size and gender (so that the Mii uses the same voice), incorrect voices will be assigned for them instead (except for the player that selected the Mii first). For instance, if 3 players choose the same Blue colored Mii, the Mii of the player that selected the character first will have its correct voice, whereas the other players will have another voice assigned (for example, the voice for a Red colored Mii and a Green colored Mii respectively).

The default Title Screen (the one with Mario and Luigi) is not assigned to play any voice quote. However, when the game is completed, new Title Screen images will appear, and a voice can be heard depending on the character shown. If the player listens to one of these voices, and then deletes all the licenses (so that the game will return to the default Title Screen), the last voice quote heard will actually play on top of that default screen, despite the fact that no voice quotes are assigned to it.

If a competition/tournament has the scoring objective set to hitting Monty Moles, the player will also score if they are hit by a Monty Mole. No tournaments appear to have this objective, however.

Sometimes it is possible to make the vehicles's exhaust pipes fire disappear if a player holds a miniturbo, releases it, and dodges a Blue Shell right away by using a mushroom. The effect of the bug only last through the duration of the boost however.

In online play, when watching a Live Replay, if the player switches perspectives with another racer, the shadow drop seen in its minimap icon will appear in the right hand side of it (similar to how it looks when looking at the results) instead of in the center as usual. This small bug will occur if the player switches the racer at least once, and after that, it will persist until the race is over.

Normally, the player's icon in the minimap has the priority over the rest of the minimap icons. However, this is not the case in Live view.

If you keep driving backwards in a race for two weeks, the lap counter will go above the limit of 3 laps. An interesting thing about this bug is that if it's performed, Lakitu's normally unused lap graphics actually end up being used.

Retrieved from "https://tcrf.net/index.php?title=Bugs:Mario_Kart_Wii&oldid=1319579"
Categories:
Cleanup > To do
Games > Games by content > Bugs