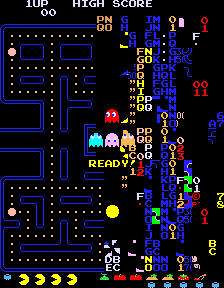 The graphical garbage seen in Level 256.

Perhaps one of the most infamous bugs in gaming, the game renders garbage at Level 256. It is commonly referred to as "Split Screen" due to the right half of the screen looking garbled, while the left half is still intact.

The bug was originally analyzed and documented by Don Hodge on his website, where he also proposes a possible fix.

Why the Bug Happens

This happens due to a bug in the code responsible for retrieving the number of fruits to draw at the bottom right corner of the screen. Inside the routine, it loads the number of the current level (being 0-based and thus 255 for Level 256, or 0xFF in hexadecimal), then increases it by one.

In the case of Level 256, this overflows the register and makes it loop back to 0 (0x00) since a byte cannot hold a number higher than 255, simply restarting from 0 if that is the case. The code does not check if an overflow has happened (which could be possible due to a so-called carry flag set in the CPU registers). In fact, it simply uses the resulting number in a check on which fruits to draw.

The check is done to compute the offset into a table which holds the fruits to draw. Levels 3-4 for example both draw an Orange, thus this "fruit table" is required to look up these duplicate occurrences of fruits. The table holds the following fruits in this order:

The problem with the check now is that it only expects values starting at 1, which is the value for the first level (internally Level 0, then being increased by one). Due to the overflow with 0xFF, the check gets value 0 - something the programmers did not expect.

So what does the check do exactly with the number it gets?

So far, this is still not a big issue. However, the aforementioned loop is coded in a way it does not work together with value 0. To implement a loop in assembly language, the counter is stored in register B. It is decremented at the end of the loop and then checked if it is 0 to stop the loop from being started over again.

How the Garbage Is Placed 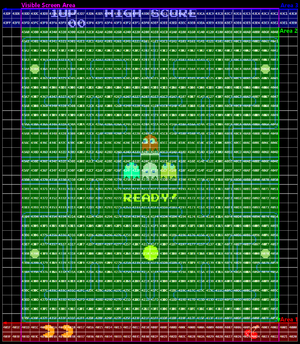 Video memory locations as mapped to the screen.

What this means is that the game is now instructed to loop over the fruit drawing code 256 times - these are by far too many fruits to draw. Running out of entries in the fruit table (which also point to the video memory holding the graphics of the fruits to draw), it starts accessing other parts of the video memory, grabbing seemingly random tiles of graphics and drawing them onto the screen into increasing video memory locations.

But why does this actually cause the right half of the screen to be overwritten? This is because the video memory in Pac-Man is not laid out as in modern computers (which are increasing video memory locations from top left to bottom right). It is separated into three parts:

The game continues drawing until more than half of the maze video memory has been overwritten with garbled data, and B finally becoming 0 before it is checked to end the loop. In fact, the game has no code or bug which exactly trashes "half" the maze; it just happens to be about (but actually more than) 50% of the maze memory.

Causing the Level To Be Unfinishable

To finish a level, the game checks if 244 dots have been eaten.

When the maze memory is being overwritten by the fruits - which are drawn at level start and every time a life is lost - most dots are erased with it. Only 9 tiles still get a dot flag written to.

Every time the player loses a life (assuming he still has some in this high level), the fruits are redrawn, and the possibly eaten dots are placed again in the garbled area. The player can reach a maximum of 6 lives in this game, and even when bringing them all into Level 256, causing the 9 dots to be placed again 6 times at each death, there are still not enough dots to eat to finish the level, and thus the level end never triggers.

It can be manually triggered with a hardware dip switch (the "Rack Test" feature), which throws the game back into Level 1 with the scores still intact, though of course this is not seen as "normal" gameplay. There are some leftover graphics in the bottom corners of the screen which do not get redrawn under normal circumstances and actually stay visible until the machine is reset.

When the ghosts switch from scatter mode into chase mode to attack Pac-Man, each one uses a different logic to actually target him:

To understand the bug, it is required to know how the distance to a tile afar is represented in memory. Basically, a 16-bit directional vector is used as seen in the following table. These values only make sense when remembering that the origin of the coordinate system of the maze is at the top-right rather than top-left, and that 0xFF to 0x80 means -1 to -127 in an 8-bit value (while 0x00 to 0x7F is 0 to 127).

To now compute more than 1 tile afar into a specific direction, the game simply multiplies the vector by the required distance. Purposefully making use of the values overflowing when multiplying the Right vector, this seems to result in the correct distance vector. Let's see the results when trying to retrieve the spot 4 tiles down, left, or right:

However, this does not work out when multiplying the Up vector, as no overflow happens since the value is treated of 16-bit size:

Since a 16-bit value can take more than just 0xFF and the multiplication is done in 16-bit, the value does not overflow and instead "spills over" into the X offset, making the direction not only go 4 tiles up, but also 3 tiles left. When this incorrect movement vector is added to the position of Pac-Man then another "spill over" from the Y component to the X component will occur. As the result, the calculated target will be (4, -4) relative to the position of Pac-Man.

Inky uses the same buggy logic, he thus computes a tile offset 2 to the left when trying to get the spot 2 tiles up.

N.B., when moving Pac-Man or ghosts, the game's code calculates the x- and y- coordinates independently with two 8-bit operations, instead of using a single 16-bit vector for both coordinates at the same time. This is why regular movement is calculated correctly.

Passing Through Ghosts Without Getting Hurt

Due to the way the collisions with ghosts are detected, it is possible to pass through ghosts when approaching them exactly in the frame where Pac-Man and the ghost both switch the tiles they're seen on by the collision detection code. Requiring this to happen on the exact frame, this happens very rarely, though it has been incorporated in professional level solving patterns (Billy Mitchell once executed a Cherry level pattern abusing this glitch several times in one run).

The frightened (blue) ghosts use a pseudo random number generator (PRNG) to decide which direction to take at an intersection. However, this PRNG is reset every time a level starts or a life is lost, so their behavior is predictive when moving exactly the same as Pac-Man (like it is done with level solving patterns).

This is not generally seen as a bug and might be intended by the developers, though it could be a programming oversight as well.

Retrieved from "https://tcrf.net/index.php?title=Bugs:Pac-Man_(Arcade)&oldid=1016360"
Categories:
Cleanup > To do
Games > Games by content > Bugs