Pac-Man is the story of a yellow circle that runs from ghosts and eats dots, fruit, and keys(!) in 255 identical mazes. The game quickly became extremely popular, being ported to dozens of systems including, most infamously, the Atari 2600.

An unused explosion present with the rest of the graphics. It was removed in Pac-Man Plus and replaced with the 3200-point score sprite.

The graphic is present with what may be its correct palette in the Character Slideshow of Namco Museum Vol. 1, under the name "Blast". However, this palette is not present within Pac-Man itself. Jr. Pac-Man would be the only game in the series to ever use the explosion, albeit with two different palettes and several flipped rotations.

In the game's graphics data, there are three types of dots: the regular ones, the Power Pellets, and an unused medium-sized type in between. The medium dots appear in the code of Pac-Man, Pac-Man Plus, and Ms. Pac-Man, but go unused in all three games. However, as with the Blast, they were later incorporated into Jr. Pac-Man (when a bonus item runs over a regular dot). 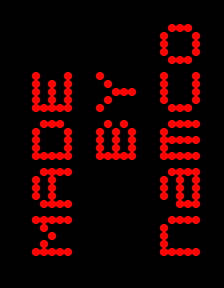 Enter Service Mode, then quickly toggle it off and on. A video alignment grid will appear on the screen. Hold P1 START and P2 START and toggle Service Mode off and on again. If you've done it right, the grid will stay onscreen. Using the joystick, press Up (×4), Left (×4), Right (×4), Down (×4).

The words "MADE BY NAMCO" should appear on the screen in red Power Pellets. This also appears in Pac-Man Plus, except the pellets are yellow. 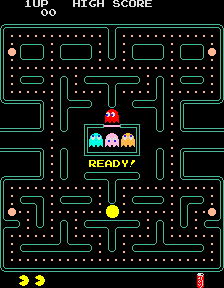 An "official" conversion kit released by Bally Midway in 1982. While the fliers for Plus claimed it to be "A whole new game of surprises!", in reality it's just a small variation of the original Namco code.

The version found on Arcade1Up machines changes the logo on the Coca-Cola can to "PAC", while the "Legacy Edition" cabinets simply feature a blank coke can. This was likely done to avoid legal issues with Coca-Cola.

In the Japanese version, the ghosts' character names are Oikake (おいかけ, chase), Machibuse (まちぶせ, ambush), Kimagure (きまぐれ, fickle), and Otoboke (おとぼけ, playing dumb), fitting their behavior. They are also given nicknames: Akabei from aka (赤, red), Pinky from pinku (ピンク, pink), Aosuke from ao (青, blue), and Guzuta from guzuguzu (ぐずぐず , adjective meaning "slow" or "languid"). Their names are different in the North American version, though the pink ghost's nickname was unchanged.

The board has a DIP switch called "Alternate Ghost Names". In the Japanese version, this would change the ghosts' character names and nicknames to a different set, but in the North American version, the alternate set is dummied out and replaced by one-unique-letter strings in alphabetical order. Interestingly, the alternate character names are used in all versions of Pac-Man Arrangement (1995).