A demo version of Ms. Pac-Man Maze Madness from an unknown source, possibly a demo disc. Its build date is unknown.

The Ms. Pac-Man on the title screen was remodeled, and the camera angle was fixed to be more straight-on.

Professor Pac's holograms are a little smaller in the demo, and a bit off-model. 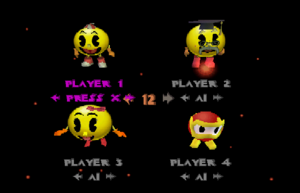 Pooka (bottom-right) and Pac-Jr. (top-left) are available by default, rather than being unlockable like in the final game.