What happens when Pac-Man munches a few Tetriminos and falls asleep.

Inexplicably, this version retains the US title in Europe. The European Game Boy, Mega Drive, and CD-i versions were known as Pac-Panic.

Located at 0x0000 is a copyright message from Namco.

The string No.022235 NAKA-P is written to $7FFFF0-$7FFFFF at startup. This is used to distinguish between soft and hard resets. Pro Action Replay code 80817F0F will enable a simple input test screen that displays the status of every bit returned from controller port 1. The last four bits are typically used to identify non-standard controllers and devices, such as the Super Scope and SNES Mouse, and will change accordingly when these devices are connected.

In puzzle mode, get a game over, then on the game over screen, press L to increase the stage number displayed in the top right corner, and R to decrease it, then choose Retry to go to the chosen stage.

While the arcade original was localized normally, the SNES version's graphics and sound were extensively modified outside Japan to feature Pac-Man. These changes became the basis for most future releases of the game.

The menu layout has been changed.

The password screen is completely different, and uses letters instead of Japanese characters. Also, the passwords are shortened from four digits to three.

In Cosmo Gang: The Puzzle, the introduction is animated, and the dialogue appears one character at a time. The scene ends automatically when finished.

Pac-Attack displays its message all at once, in plain text. It remains until closed by the player. 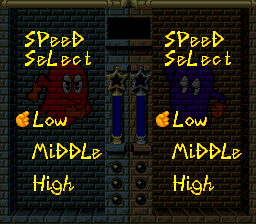 In Cosmo Gang: The Puzzle, only the B button rotates pieces. Pac-Attack also allows A or Y.

The European version boots directly to the title screen. The US and Japanese versions however, first display "Namco" and "Namcot" logos respectively.

The European version blocks 60Hz mode with an error message. In the US version this screen exists, but won't appear, because it allows 60Hz.