Pac-Man World is the story of how Pac-Man's 20th anniversary was ruined because his friends were kidnapped. Now Pac-Man has to do platforming in order to save them.

Unused levels are actually pretty abundant in Pac-Man World, so here they are.

There is actually a third ruins level, however, due to time or space issues, Kooky Crypt was left unused. When accessed, the level doesn't have very many objects; it's mostly traps. Oddly enough, Kooky Crypt is actually set outdoors, unlike most of the other Ruins levels. Also shown in the video is an unused maze layout, possibly meant for Kooky Crypt, and an earlier version of the ruins' bonus rounds. This version looks a lot more barren; it has a black sky and little to no decoration.

More unused levels and even some unused mazes exist in the game. Some of these range from nearly-complete mazes to unfinished maps that include oddities such as startling a player right as they start the level, and levels that are only the "bubbly" texture in the Funhouse stages.

To access these levels it is necessary to have the debug mode activated and they are only available until now in July 21st, 1999 build.

We can see an early ghost island seen in Sony PlayStation Autumn-Winter Collection '99, with the difference that it has no textures.

This level appears to be from the preview version shown at E3 1998 or earlier.

This level appears to be from the preview version shown in the Sony PlayStation Autumn-Winter Collection '99 before the level redesign in December 1998. 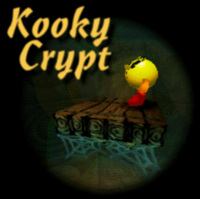 This isn't seen normally in-game, but can be seen if you access Kooky Crypt.