A console beloved by the generational gap between Millenials and Gen Z. This Plug & Play console also introduced some members of Generation Z to the game Mappy.

On the opening screen, hold Up, press and hold A, release Up and press Down to enter Debug Mode. 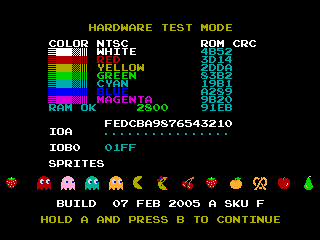 A hardware test for the controller. There are also graphics and sound effects from Ms. Pac-Man present on the menu. 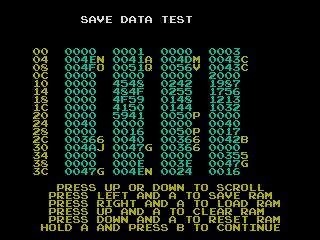 A fake data save test. 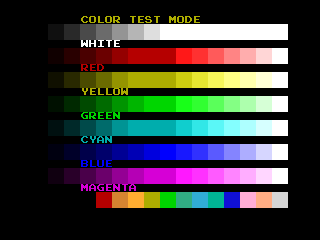 A color test for the TV. 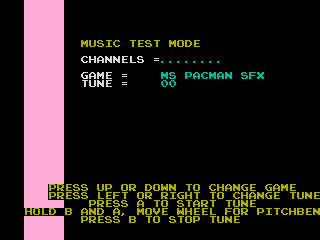 A music/sound test from all games. Each track's pitch can be altered by twisting the joystick. The music for Pac-Man is also featured here, despite the game not being included. Each of the games included also feature music and sounds (Nearly their ENTIRE sound sets! Even the IDs match the originals!) that were originally used in the arcade versions, but not this one, mainly due to simplified/unsupported/removed features. 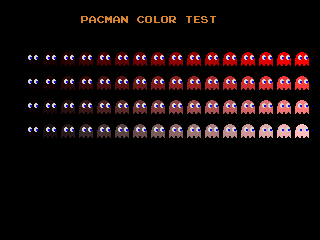 A game color test that contains the ghosts from Pac-Man. They have colors that fade away. If you keep pressing A the colors will change to green, yellow, blue, magenta, and cyan, respectively.

In addition to its aforementioned music, all of the text strings for Pac-Man are in the ROM, starting at address 16900. It is unclear if the full game is here or not, though if so, it differs in code slightly to the Gamekey cartridge.

For whatever reason, the area for Namco's name in the copyright information is blanked out. The amount of (extra) spaces suggest the intention was to use the Namco logo from Puckman's title screen.

Ms. Pac-Man Collection was one of, if not the most popular plug & play ever released (before that *other* one came out, anyway). Because of this, many revisions and alternate versions of it were produced. Here are the differences between versions:

Based on Revision 2, this system included a cartridge slot allowing for additional games. Three different cartridges were released:

All of the Gamekeys feature a similar debug mode to the standard plug & play. On the #2 cartridge, Dig Dug's music and sound effects seem to be different from the game.