It's also one of the few Pac-Man arcade games to not initially be released outside Japan, only seeing international distribution through Plug & Plays and the Namco Museum series.

Several animation frames of a ghost with a rather large lump growing out of its head.

"山下ため Y.Y. NG", which roughly translates to "Yamashita for Y.Y. NG". NG is speculated to refer to the Namco magazine of the same name, and "Yamashita" may refer to planner Yasunori Yamashita (who is also credited in Super Pac-Man). Note that these tiles only appear in Pac-Man & Chomp-Chomp, overwriting a chunk of the removed Pac & Pal title screen graphics. 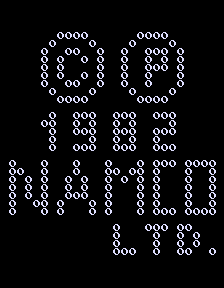 Although the game only released in Japan, Namco did plan to localize and release Pac & Pal in North America. There is another version of the game called Pac-Man & Chomp Chomp, which replaces Miru (the green ghost) with Chomp Chomp, Pac-Man's dog from the Hanna-Barbera Pac-Man cartoon. The game was pretty much done besides one or two missing graphics, but since it didn’t receive much of a profit from testing sites, it was ultimately cancelled. Functionally, Chomp Chomp acts exactly like Miru (as expected).

Aside from the title change, Pac-Man and Miru were replaced with...nothing. This may be because the game was never completely finished, or perhaps they simply had no plans for new title screen graphics.