A 3-in-1 handheld featuring Pac-Man, Pac-Mania, and Pac-Panic (better known as Pac-Attack). It's built off of crazily hacked-up Genesis hardware unlike the following Pocket Player systems, which were all Famiclones instead.

The Pac-Man Pocket Player seems to be built off of a bootleg 202-in-1, to the point where multiple pirated games and other programs are lurking in its code. While none of them are accessible on the device, it's still rather shocking they were left in the final product. The unused ROMs are as follows:

Columns, Blockout, and Space Invaders 90 have their copyrights removed, while the other games have them intact. 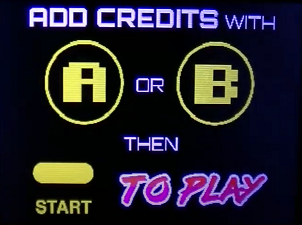 On the back of the handheld, there is a sticker explaining how to start the included version of Pac-Man. My Arcade later decided this still wasn't apparent enough, and later versions added this splash screen stating the same instructions before the game starts.