(At least it's better than the five-year gap on the original Pac-Man World.) 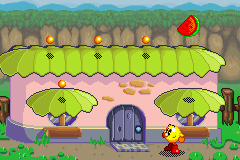 Hidden in four of the game's levels are Galaxian Keys, each of which unlocks a maze in the style of Pac-Mania. That's the theory, anyway. Collecting the fourth Galaxian Key fails to actually unlock the final maze, leaving it unused.

What appears to be graphics for a loading screen resembling the one from the PlayStation Pac-Man World. The game doesn't have much loading time at all, which is likely why it was scrapped.

(See the Notes page for the massive slog of dull error and debug text.)

Starting at 0x9E5B0 in the US ROM is all of the game's text. The user-facing text is localized into five languages for the European market, even in the outwardly English-only US release; only the English text is shown here.