Super Pac-Man is basically Pac-Man except the maze has doors and you can get HUGE.

A miniature version of the battle station from Bosconian is found with the rest of the game's graphics. It may have been intended to be an item, or it could have been padding. Interestingly, while it is unused in-game, it does appear for a split-second on the boot-up screen.

Like the "Blast" graphic from the original Pac-Man, this graphic appears with what may be its correct palette in the game's Character Slideshow in Namco Museum Vol. 2, labeled "BOSCONIAN".

Present at MAME's tile viewer at A0 are what appears to be jumbled graphics. Rotating them, mirroring them, and placing them in order reveals them to be developer credits for Fukatani Shouichi, Yamashita, and Na mco. Yes, there's a space in that tile. 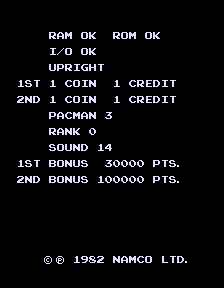 If service mode is on, a secret message can be displayed. Hold the Super Speed button and press Right, Down, Down, Left, Left, Left, Left, Up on the joystick. If entered correctly, this message will appear at the bottom.

This text is present in the Midway version as well.

During gameplay, toggle DIP switch #8 on bank SW2 to the ON position. As soon as gameplay has paused, press the Super Speed button, and the level will advance; you can continue pressing the button to advance levels. Once you reach your desired level, toggle the DIP switch back to OFF, and gameplay will resume.

As with several previous games, Midway made some minor changes when they brought Super Pac-Man overseas.

Oddly, Namco's text was left in for the service mode Easter egg (see above).

In the Bally Midway version, Pac-Man is much slower than the Namco version when holding down the "Super Speed" button.

Most of Pac-Man's sprites have a thick outline around them, but it is blacked out due to the color palette used. This is what the graphics would look like with the outline enabled (colored blue).