Tengen's port of Ms. Pac-Man for the NES is, surprisingly, a much more faithful port than Namco's own port, despite being released three years earlier. This particular port was ported to the Genesis in 1991, which was then ported to the SNES in 1996. Port port port. 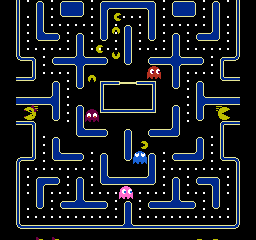 In a two player game, if both players enter a tunnel and collide with each other at the same time from inside the tunnel, a Junior will spawn from atop the Ghost House and roam the maze. Up to six Juniors can be spawned and each Junior can be picked up for 5,000 points.

This easter egg can be triggered on levels 10 and upwards, and once triggered six times, no additional Juniors will spawn. The easter egg does not exist in the Genesis, SNES, or Sega Master System versions of the game.