Starring Pac-Man and... some old hag?

The SNES Pac-in-Time, unlike the other games with that title, only uses the same basic gameplay mechanics. Otherwise, it's an entirely new game using a different game engine and aesthetic. 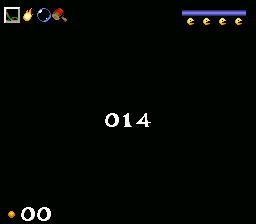 Enter LVDYK as a password. Return to the title screen and highlight 1UP Game or 2UP Game, then hold L + R + Left and press Start.

While this sprite is actually used in-game when Pac-Man takes damage from touching a sawblade, the sprite is actually made up of two distinct halves that are normally always pieced together. The individual halves of the sprite reveal some pretty nasty hidden details, possibly meaning that the developers initially intended for the sawblade obstacles to cut Pac-Man in half rather than just damaging him.

The beginning of the ROM contains one of the following dates: