Ratchet & Clank Collection is chock-full of bugs, thanks to a terrible port to the PS3 by Idol Minds and an even worse port to the Vita by Mass Media.

The bugs are mostly immersion-breaking rather than game-breaking, such as incorrect aspect ratios on some cutscenes, hilariously oversized helmets, and awful framerates. The game really makes you wonder at times how it passed through QA.

The bugs listed on this page are only present in the Collection and not the original PS2 versions, unless otherwise specified. 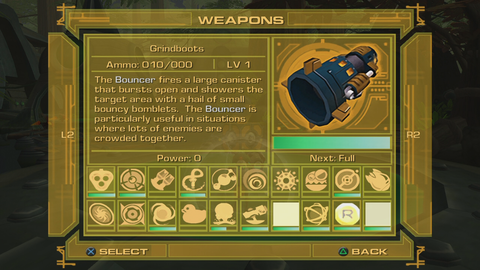 On the HD versions of Ratchet & Clank 2, Ratchet & Clank 3, and Ratchet: Deadlocked, quitting the game will allow you to corrupt certain values in memory with control. Every time the game autosaves, it writes the data that is used for the save-file description in the save/load menu (save-description): the ID of the planet you're currently on, your bolt count, your current challenge mode, and your total playtime in frames. The save-description takes up 0x10 (16) bytes.

However, where it writes this is determined by another value (write-offset) multiplied by 0x1C (28), stored nearby in memory. The write-offset takes up 2 bytes (remember this!) and should always be 0, but it's not...

Not very interesting, right? When you quit the game, it could change to look like this ("FF FF" means -1):

Then, as explained earlier, on the next autosave it would write the save-description on top of this, due to the write-offset being -1. Take a file on Florana with 867,432 bolts, challenge mode 7, and 400,000 frames played:

Thus, from now on, it will not overwrite the write-offset any more (until you quit game again), but instead write the save-description at a location [ 0x000D (13) * 0x1C (28) = 0x016C (364) ] bytes after the default location. This new location is part of what you can call the "item redirection table" - basically, where it determines what item an item ID corresponds to.

This glitch is also known as the "Paradox ERR" glitch due to the game putting the text "Paradox ERR" whenever it doesn't have a text entry. And as you can see, it allows you to edit a lot of things in memory (with limitations of course). To see further documentation of item tables, item IDs, etc., see the Notes page.