An HD port of the first three Ratchet & Clank games. Notable for being full of glitches not present in the original PS2 releases.

Notice: This page deals with unused/debug content present exclusively in the HD collection. Content present in the original versions of the games should be put on their respective articles instead. Unless otherwise specified, every content listed on this page applies to both the PS3 and PS Vita releases.

All this content is exclusive to the PS Vita release.

Those 3 debug panels are exclusive to the PlayStation Vita version of the trilogy.

To enable them, use the following codes :

The same leftover Debug Menu from Ratchet & Clank 1's US release is leftover in both PS3 and PS Vita versions. For some reason, the menu is fully invisible on PS3, but is still fully functional. 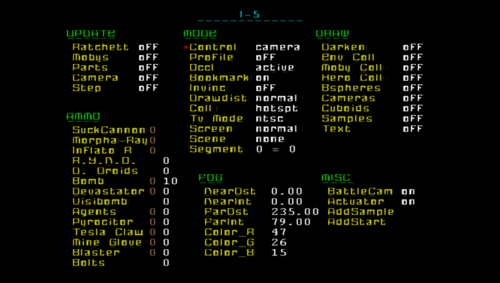 Presumably due to either a glitch or a developer oversight, the Fizzwidget Robot that gives tours on Planet Todano does not speak, meaning his audio goes unused.

Two debug codes for the HD Up Your Arsenal are left enabled and can be entered by the player. Debug codes for the other two games are disabled and it is unknown if they still exist within the other games. If you enter the same codes on the retail PS2 version, nothing happens. Idol Minds most likely forgot to remove it from the HD port. If you enter the same codes on the betas of the game, you will be given access to a complete debug menu and all weapons and planets, which is interesting because that doesn't happen on the HD port.

Enter the Pause menu and press Up, Down, Up, Down, Left, Right, Left, Right, and Circle. This will allow the player to access any planet in the game once they gain access to the ship. This also unlocks two unused planets named 'level15_cityname' and '#', the latter using the Insomniac Museum's planet in the Galactic Map menu, despite the fact the Museum cannot be accessed this way. Trying to fly to either of these planets will crash the game.

By utilizing the Game quit glitch, we can manipulate the vendor region where the vendor is and use it to give us any item we want. Set the bolt count to anywhere from 1,507,328 to 1,572,863, quit game then autosave twice to activate the glitch. The game will write Planet ID, Bolt Count, Challenge mode and Frames played. So if you set your bolt count to x (the bolt counts below for example) while the glitch is active, it will put that item in the vendor. Same if you manipulate your Planet ID or challenge mode to correspond with the values listed below. A bigger and more comprehensive table for item IDs can be found here.

Most of these items are just Ratchet & Clank 2 leftovers, but are worth noting down here since you can actually get them in-game with a glitch.