Ratchet & Clank is the first of Insomniac's efforts on the PlayStation 2. While considered a classic among many, it is often noted for its lack of RPG elements (weapon leveling, XP, etc.) compared to other entries in the series.

Based on an idea where an alien creature roams the galaxy with an esteemed arsenal of weaponry, the game formed the basis for a franchise that would eventually become one of the PlayStation's most popular.

A debug menu can be enabled at anytime in a level for the NTSC-U version of the game with this GameShark / CodeBreaker code:

Pressing R3 while in the menu will return to normal game-play. 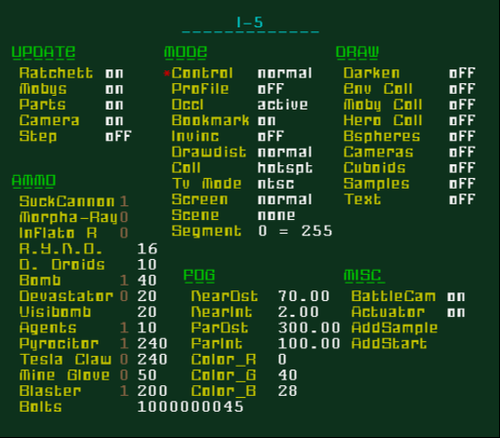 Notice the top of the menu says "I - 5". This is because it stands for "Insomniac - 5", Ratchet & Clank being the fifth game of theirs.

Every weapon can be potentially upgraded to gold, complete with the appropriate graphical tweaks. But the lack of any tangible difference in their behavior and the fact they're pointing to non-existing text and icons suggests they were probably never meant to be implemented.

If the Drone Device is placed into Ratchet's hand through hacking, the behavior it exhibits is actually a leftover from when the weapon was known as the Defensive Drone Glove. Pressing Circle will make Ratchet play a throwing animation like the other glove weapons in the game. The weapon also uses the Hologuise model, since they both shared the same model early in development. 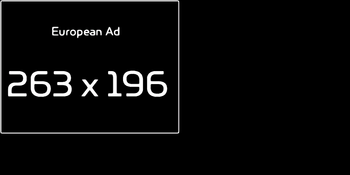 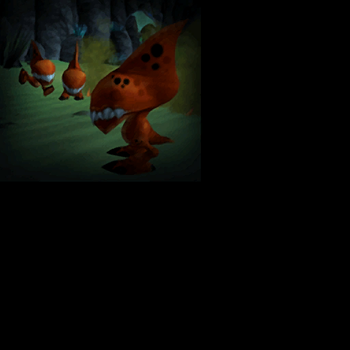 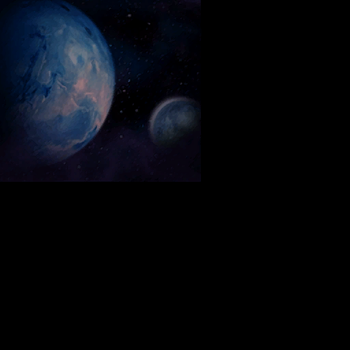 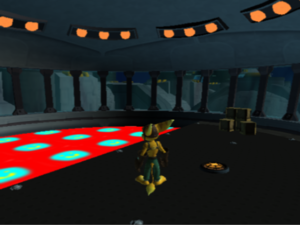 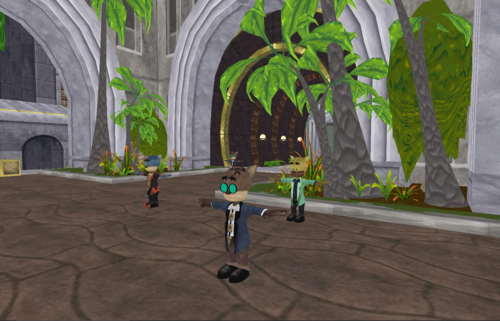 Two unused cheats remain in the game. They are as follows:

Only Left-handed Ratchet's function remains in the game. You can activate the cheat with the following code for the NTSC-U version of the game with a GameShark or CodeBreaker:

This will make Ratchet hold all his weapons in his left hand.

In Drek's Fleet, there is a 6th vessel that can only be entered with cheats/debug mode, used exclusively for cutscenes featuring Drek. It has no collision, and trying to stand in it will kill Ratchet.

While Gold Weapons are still purchased at the Gemlik Base, the of suffix Nebula G34 would later be used for the Blarg Station.

Leftover text from the demo versions.

Clank's mother would have said this message during the cutscene on Quartu, but it never gets used.

In the Japanese version of the game, Gadgetron is referred to as Galactron, meaning that all vendors say Galactron instead, In the PAL Platinum version on Kalebo III there is a rotating Galactron logo still present.

In the original black label NTSC version, the RYNO salesman would still appear on Rilgar if you bought the RYNO in a previous playthrough with a prompt to watch the buying cutscene again for free. This is bugged though as accepting the prompt will cause his introduction scene to play twice instead. In later versions the RYNO salesman will be gone forever after purchase.

Cutscenes in the NTSC version require all triggers and bumpers to be pressed down along with start to skip cutscenes if in a new game file. The PAL version only requires pressing start.