Our favorite Lombax and Robot duo have returned for a third time in Ratchet & Clank: Up Your Arsenal, and this time they've brought online multiplayer, even more powerful weapons, 2D sidescrollers, more innuendos, a central mission hub, and of course, more cut content.

The files that when pieced together make this unused track are named 'rc3_l31_boss'. Under the same naming scheme, the 'l31' prefix is for the first Vid-Comic . The purpose of the track is revealed by the game's demo. In its version of the first Vid-Comic, the Insomniac Museum background music is used as the stage theme and the unused track is used for the boss. In the final game, these are replaced with two different tracks.

It is of note that this music can be heard in the final game by approaching the door leading to the first Vid-Comic boss and standing right below the entrance. As a side effect, returning to the outside of the boss room after doing this will play the Insomniac Museum's music.

In the Insomniac Museum, there exists a room which can only be accessed by moonjumping to a specific part of the roof and falling through or by using a glitch. It is a small room with a lone jump pad and a narrow maze-like corridor which ends with a floor that instantly kills Ratchet if he walks over it.

According to developer Mike Stout, this was originally planned to be a wing of the museum, which would be accessed by falling down an elevator shaft. The jump pad would have been used to go back up.
In the end, the museum turned out to have more space than needed, so access to this area was blocked, and the stuff that was in it got moved to other places in the museum. Jump pad was left in case QA somehow found a way down because he didn't want to get a bug report about it.

There is a TON of unused text within the files.

A very large block of text summarizing a portion of the game.

The In-Level Movies feature from the first game would have made a comeback. The list references a few things that were cut from development.

The shortcuts feature from Going Commando would have returned as well. It also references the two scrapped racetracks yet again, and a scrapped "Robot Base Battlefield" challenge. "Sandshark Battlefield" could have been a possible early name for the Aridia battlefield.

Some text for weapons that were cut early on.

Some random cheats for the Goodies Menu.

These messages were most likely intended for the developers. 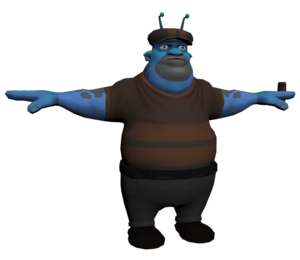 A model of the driver for Supernova Taxi can be found among the cutscene files on Zeldrin. He does not make any physical appearance in the level, and is a leftover from when the developers recorded the cutscene between Qwark and the Driver. 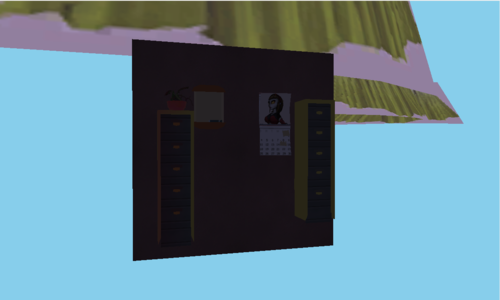 The office seen in the Supernova Taxi cutscene can be found at the center of Zeldrin, at coordinates 0, 0, 0. Just like the driver, this is a leftover from when the cutscene was being recorded. 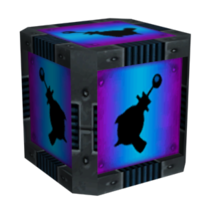 A special crate not normally usable in game. According to developer Mike Stout, the Upgrader Crate was scrapped since it took the fun out of upgrading weapons by using them, as it would have upgraded Ratchet's weakest weapon by one level. The crate is still fully functional, however it was made to delete itself on the first frame - hence making it "invisible". By removing the self-deletion code, the crate becomes fully functional again, as can be seen in this video: 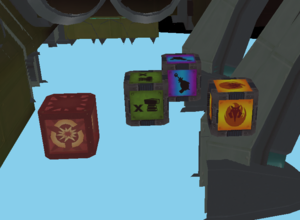 The Upgrader Crate, as seen in the Phoenix Rescue map along with some other crates that don't appear in the level. 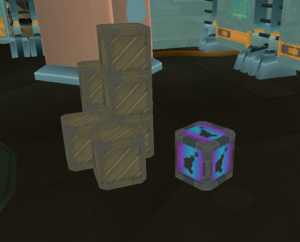 The Upgrader Crate, as seen in Holostar Studios. 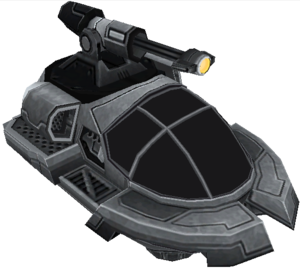 A tank that was intended to be used in the multiplayer mode, removed for unknown reasons. The tank can be enabled via hacking and is actually fully functional. 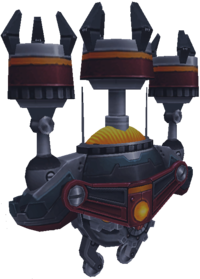 This odd-looking contraption spawns the Ameboids in Vid-Comic Episode 2, dropping them from the sky. However, they're always out of the camera's view and impossible to see in normal gameplay.

A fully functional Bomb Glove exists in the game, along with a not so functional Sheepinator. A placeholder Plasma Whip, in its original model scale can also be found, though it is completely useless and just a leftover from previous builds.

In the graphics of Florana, there is a texture for the Turboslider. By now, you should know why it's in there. 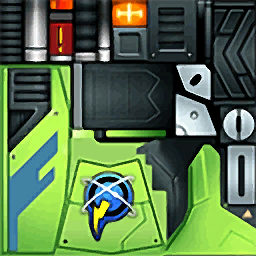 The texture of the bananas fired by the Banana Guided Autonomous Monkey Device contain a hidden image of the moon from the logo of Insomniac Games, along with a silhouette of what appears to be Ratchet. The moon is placed in a part of the texture that is not mapped to any part of the mesh. 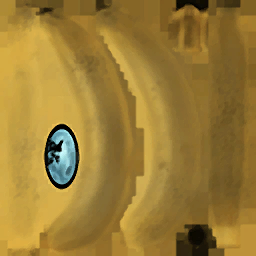 While every member of the Q-Force gets their own icon for HelpDesk messages, Skidd and Skrunch do not have any HelpDesk lines, leaving their icons unused.

Although the aforementioned Turboslider races have been completely removed from the final game... Florana actually has visible remnants of it! At coordinates 215, 438, 760, this arrangement of Turbosliders can be found, as if they were waiting at a starting line. They cannot be entered, and none of them have any collision. 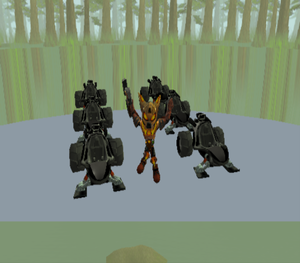 At approximately coordinates X: 295, Y: 292, Z: 200 (underneath the island with the red base) in the multiplayer map Bakisi Isles, there is an out-of-bounds Gravity Bomb ammo. 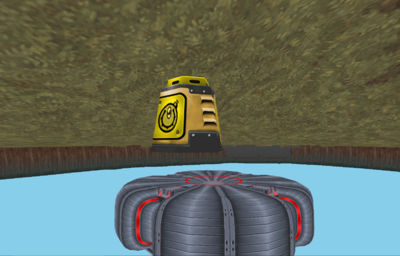