Ratchet: Deadlocked is the fourth game in the Ratchet & Clank series, which is notable for being much more linear and mission-based without freeroaming than its predecessors and causing debate amongst the fans because of it.

In the files for every level of the game, there is an unused picture of Ted Price, the CEO of Insomniac Games, photoshopped to have a mullet. According to developer Mike Stout, Carl Grande (the Asset Manager for Insomniac) was fond of making humorous pictures such as this one to serve as temporary assets during development.

In the files for the singleplayer levels, there exists an unused crate model with the DreadZone logo on the sides. Its purpose is unknown.

There are several pieces of unused audio within the game. Most of it is alternate dialogue for missions, while others were most likely intended as generic dialogue and boss fight quotes.

The most interesting of the unused audio clips, as it doesn't relate to any existing missions. According to this audio, there would have been a mission on Planet Shaar that would have involved freeing fellow DreadZone contestant Hydrogirl. Since this mission was cut, Hydrogirl's only appearance (and speaking role) in-game is during the ending cutscene.

Most likely alternate dialogue for one of the three Shellshock missions on Kronos, or a fourth mission featuring Shellshock was planned.

Pieces of dialogue related to Ace Hardlight, and some dialogue that he presumably would have said during the boss fight with him. The dialogue at the beginning of the video was most likely early dialogue for the fourth Torval mission, in which Ratchet has to destroy an Ace Hardlight statue with explosives.

Dialogue most likely intended for the final boss fight and the DreadZone containment facility intercom. The last speech is actually used in the game, when the first phase of the boss fight with him finishes. 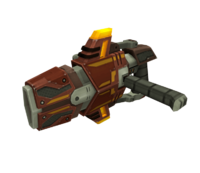 Unofficial render of The Raptor

This In-Level Movie suggests that, at some point in the game, Clank was meant to be saved by Ratchet at the Ghost Station. Even though the reason for Clank being in this level is unknown, since he never makes a physical appearance outside of the Dreadzone Station, it is believed that Vox could've kidnapped him.

As we know, once in Challenge Mode you can buy a "Mega" version of weapons, which can be leveled up to Level 99, but using Cheat Engine and PCSX2 you can force to level weapons up to Level 128 instead. A strange thing is that the damage/time (for the Holoshield) is increased even if you can't access these normally, meaning a possible further weapon leveling. However when a weapon is forced to be Level 100+, you can't collect experience to level a weapon.

Apparently more weapon mods should have appeared. From what can we understand from the game's files are Omega Mods. These don't have a description. The Mods are: Hover Mines, Shiny, Shockwave and Spiffy"".

Also some cut missions can be found. Maybe these were meant for the cut planets. However are: Ace's Daily Run, Spider Versus Spider, Outrun, Outwit, Outlast, The Sky Is Falling! and Turret Command.

In the Japanese version, the sequence that plays when Ratchet upgrades his armor is entirely different.