Ratchet and Clank Future: A Crack in Time is the third (second in Japan) (and last) title of the Future trilogy, and sees Ratchet continuing his quest to find Clank, who has now found himself being the caretaker of The Great Clock. It also marks the return of Dr. Nefarious.

"Space, it's huge. So huge in fact, that if you lost your car keys in it, they would be almost impossible to find..."

mainmenu_i3 is an early title screen.

Mainmenu_i1 is the same image as above, but without the game's logo. 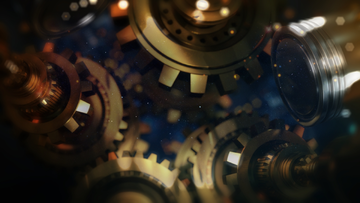 Loadicon_i1 is an odd image once used as a placeholder for loading screens.

Through hacking, it is possible to equip the Thruster Pack, which is a leftover from Tools of Destruction. However, it lacks the proper animations, model, and sound effects.

The omnisoaker is used to pick up and move liquids, these being water, oil and nectar during normal gameplay. Through hacking, a lava-like liquid can be put in the omnisoaker, but the game crashes when you try to fire it. 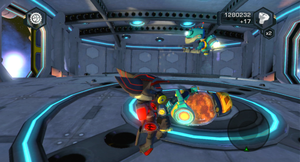 Azumith has numerous pieces of cut dialogue, most of which relate to his childhood experiences with Ratchet's father. The most interesting of these, however, is Azumith mentioning that Ratchet's mother was friends with a character named Lorna Cross, an unknown relative of Angela Cross.