Originally a computer game, California Games on NES is a game where you partake in sports popular in California. 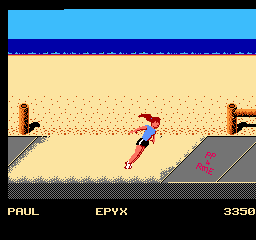 Another love story. During the rollerskating game, if the player's name is "PAUL" or "RACHEL", the writing "PP & RME" will appear on the ground at the end of the course.

The same names or initials can be found in other Rare games by the same developers (Marble Madness and Wizards & Warriors), including the default record tables. They also appear in the Wheel of Fortune series.

The initials stand for Paul Proctor and Rachel M. Edwards, the developers. The hidden text was removed from the European version, along with the "RACHEL" listing in the hi-score table.

The reset routine in the US version uses the following string to check if the game was soft or hard reset:

The European version removed this, using the below instead:

Also, every PRG bank of the US version contains a small copyright string:

...Which was updated for the European version:

The European version plays the menu music on the title and copyright screen, instead of using the original title theme found in the US version.

The US version gives the player the option to instantly skip the copyright text. However in the European version, you must wait about 5 seconds for the copyright screen to transition to the title screen.