The NES Wheel of Fortune is the first of the console's four adaptations of the famous game show, and probably the most faithful translation of that group...even if the top amount in each round is a paltry $1,000.

Two unused versions of the classic Coca-Cola logo. It would appear that during the game's development, Coca-Cola wanted to advertise its ownership of Merv Griffin Enterprises (the company that created and produced Wheel), but the sale of MGE to Columbia Pictures Entertainment Inc. in 1988 scuttled the idea.

The first logo is loaded into VRAM on the title screen, and was likely intended to appear in the scrolling text at the bottom of the screen (the palette used for the text fits the logo perfectly). The graphics data seems to have been shifted upwards by several pixels (note the bits of ribbon below the logo), and most of the ribbon is missing.

The second logo is loaded into VRAM on the copyright screen. While this version contains the missing ribbon tiles, it also has a couple of miscolored pixels inside the top loop of the "L".

At the start of the puzzle bank (109D0 in the ROM) is a puzzle not referenced at all by the game:

It seems to be a copy of the text shown on the puzzle board while the game is setting up, but the data for that is located at 6BB-6FA in the ROM.

The puzzle selection routine is unable to select the final puzzle in the puzzle list: 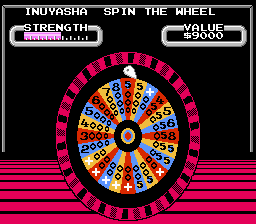 The game supports a lot more variety in Wheel wedges than is actually used, including values much higher than the normal top dollar of $1,000 (although oddly, despite being released nearly a year after they were introduced, neither $2,500 nor $3,500 are present).

For reasons unknown, one puzzle was changed between the Revision 0 and Revision 1 releases:

The former is a line from Bob Dylan's All Along the Watchtower, while the latter was Rodney Dangerfield's catchphrase.