This is a sub-page of Captain Toad: Treasure Tracker (Nintendo Switch, Nintendo 3DS).

Part 2 of 2. Of course, several testing and development related levels were accidentally kept as well...

An early version of Up 'n' Down Desert from Episode 3. The general layout was kept for the final despite obvious adjustments like moving one of the Super Gems or removing some objects. Notably, the moving platforms are missing and some flowers (FlowerRhythm) are in place of the pedestal. The level's main model (KitaharaFixParts154) has not been converted to a proper archive yet. In the final version, the fences are part of the main model whereas the early version uses the object SampleGuardD. 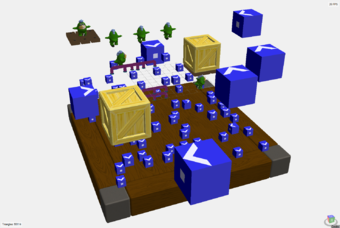 A very early level featuring a handful of Spike and two large crates. Due to the lack of level models, it is anyone's guess what this stage looked like. It's probably just a simple test level... 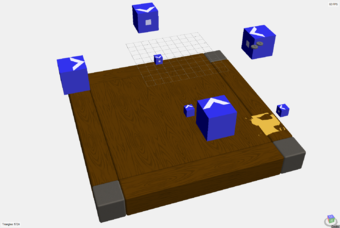 Because this level and Kinopio01 share the same floor object, both levels were probably based on the same template. Compared to the previous map, this stage is rather empty. It features two coin stacks and a yellow moving platform. 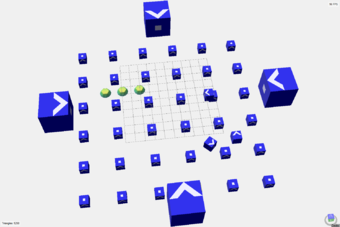 KinopioSampleStage appears to serve as a template for other testing stages. It contains nothing specific but three Super Gems and a Power Star. The floor consists of several KitaharaFixParts019 objects. 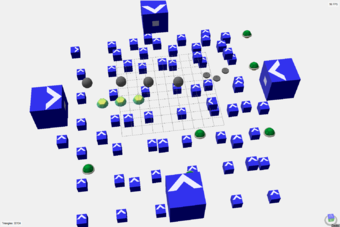 This testing stage takes the layout of KinopioSampleStage and adds three coin stacks, some invisible coins, four 1-Up mushrooms and a bunch of Koopa Shells (both green and gold variants). Koopa Shells are not used in this game at all. The level was most likely used for testing object interactions between shells and several items.

An early backup copy of Wii U's Pop-Up Prairie Town. It is almost identical but the nine hidden coins have not been added yet.

An early backup copy of Touchstone Trouble. It is nearly identical; the placement of some objects is slightly different and several objects - mostly hidden coins - have not been added yet.

This nearly-finished version of Drop-Road Dash features Skipsqueaks (an enemy from Super Mario 3D World) in place of Para-Biddybuds. As usual, the assets were not converted to proper files yet. Therefore, the final stage model was added in for comparison purposes.

A different, unfinished version of Floaty Fun Water Park which was used in the E3 2014 trailer. Most notably, the warp pipes are green, the gray blocks are missing and it features a large Rammerhead instead of Cheep Cheeps.