Casper is a ghost of a friendlier disposition. He can also morph into stuff, apparently.

This game uses a modified version of the A Boy and His Blob engine. That's something you know now.

After exiting the first room of the game, plug in a Super Scope / Mouse in the 2P slot. This will give the player every item in the game and 5 Lives.

Using the Game Genie code 2DAC-CD44 has the same effect.

Found right at the beginning of the ROM. Similar text can be found in other late-SNES Absolute Entertainment games. 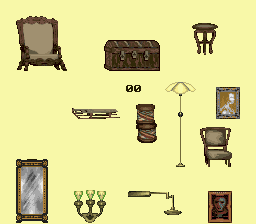 This game has a common template for filling empty / inaccessible rooms. This keeps the game from crashing when an undefined room is entered.

All but one of the rooms are the same. All furniture graphics are present, likely for testing purposes, and the room ID is displayed in the center.

Use Game Genie code DA88-C4CD and start a new game to access some of these rooms. 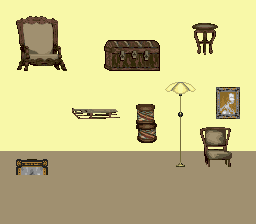 Room FF has a special layout, since this room would be accessed when going beyond the boundaries of the map. There's a rudimentary floor, and no room ID is displayed.

Use Game Genie code DD88-C4CD, start a new game, and head up to enter this room.