Castelian is a puzzle platform game released for the NES. This game also appears on other systems with different names, including Nebulus, Subline, and Tower Toppler. 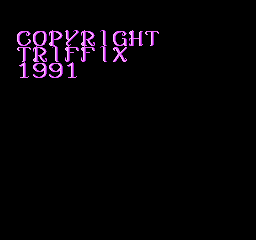 At the Game Over screen, press and hold A + Select + Up on Controller 1, then wait until the title screen re-appears. Instead you'll see the secret copyright message. The message itself is encrypted by xoring with $55 value, and can't be found in hex editor as a plain text.

A couple of disabled test cheats still linger, and can be re-enabled with the following Game Genie codes.

The US version has a check in place to prevent would-be pirates from tampering with the game's text and/or hidden copyright routine. When entering a level, the game performs an integrity check on the entirety of PRG bank 3, which contains the aforementioned data. If it doesn't get the expected result, the code jumps to the wrong location and hangs. This routine still exists in the Japanese version, though it's never accessed.

A fragment of uncompiled code is stored in the ROM at address 0x03715:

The game was released as Castelian in US and as Kyoro-Chan Land in Japan, and has a completely different title screen, title music and protagonist.

Both themes are used in both games, but where they play was changed: Castelian's title music is used in Kyoro-Chan Land in the "intermission" stages between levels, and vice versa.

The US/European versions use a light green hue for the staff text, while the Japanese version uses salmon text. Other than that, both staff rolls are exactly the same.