Challenge of the Dragon (Color Dreams)

If you were expecting riding a flying dragon while wielding a sword to fight your enemies, then you've just got baited by Color Dreams. Well, it didn't look so good on the title screen anyway. 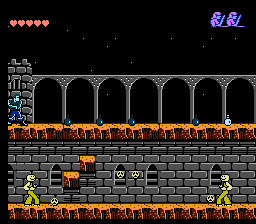 In this room, later featured in Operation Secret Storm, there will be four magic potions and one healing potion on the top floor. On the bottom floor, there will be two unused enemies.

These will throw bouncing frowning faces one at another, which disappear on contact (either with you or the other). They move around and jump sometimes, and can punch if they get too close to one another, which can hurt you if you're too close as well, all with just a basic, 3-frame walking animation. They can be hit, but they cannot be killed. Most likely just a test of AI.

This room is also a level select! Each arch in the background is actually a door you can go through, and if you press up in front of them. They take you to level 4 to 10.

This room can be accessed by the level skip cheat, or by opening the HEX editor in Fceux and going to the first address in NES memory, and changing it to this room's ID, which is 0B. That will make you instantly warp there. You can use this way of warping in any of Color Dreams' KungFu engine games.