Challenge of the Dragon, but it's a Saddam Hussein--I.. I mean, Sadist Insane critic.

There were supposed to be intro and ending cutscenes to this game just like Challenge of the Dragon, but they were never finished, although they can still be found and played in the game.

You can use this way of warping in any of Color Dreams' KungFu engine games. (Secret Scout, Challenge of the Dragon, Menace Beach), and also Free/Fish Fall.) 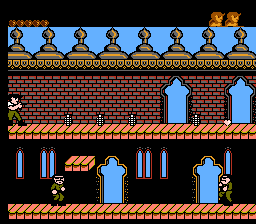 In this room, leftover from Challenge of The Dragon, there will be four bombs and one heart on the top floor. On the bottom floor, there will be two unused enemies.

These will throw invisible projectiles one at another, which despawn on contact (either with you or the other). They move around and jump sometimes, and can punch if they get too close to one another, which can hurt you if you're too close as well, all with just a basic, 3-frame walking animation. They can be hit, but they cannot be killed. Most likely just a test of AI.

This room is also a level select! A function that made more sense in Challenge of the Dragon, as there were doors in its version's background. Even though this wall doesn't have as many doors here, you can still press up to go through all of the ones that are missing, and they take you from level 4 to 10.

This room's ID is $0B, and it can be accessed either by using the method mentioned above, or the room-skipping cheat.