A game with a very long title. There are crabs and nice graphics. 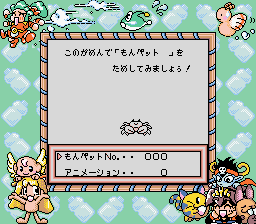 When starting a new game, enter "みえるんです" as player's name, then play the game and use the save option to make this setting permanent. Now, restart the game and at the Title Screen menu press Select to enter the Creatures Viewer. Press Select to cycle through the Super Game Boy borders, the D-Pad buttons to select objects and its animation phases, and A to view them. Pressing Start returns you to the Banpresto logo. 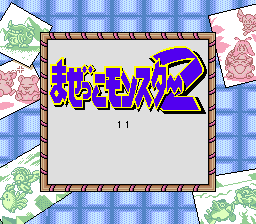 Use the Game Genie code 130-9EB-E62 to re-enable the Main Routines Debug screen after the Banpresto Logo. Use the D-Pad buttons to select any of the game main handlers and run it with Start. You'll be able to start the game from any game modes, including both endings. The CHR data for fonts are broken in the final version, so the numbers are garbled, except the initial "11" number.