The DS Chrono Trigger is an enhanced port of the SNES original. It features the cutscenes added for the PlayStation port, plus extra content and a revised translation. 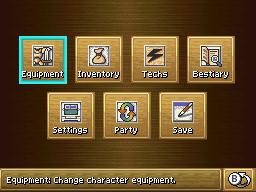 The international version removes most of the colons, changes "NEXT" to "Next level" and uses a different font for English text. It also replaces the Japanese characters with a symbol representing each element. The "天" can translate to either Sky or Heaven.

The international version removes the text from the menu grid, leaving only the icons. The icons were also moved to the center.

Chrono Trigger uses the DS firmware option for its default language, and the Japanese version allows changing the language in-game. The international versions changed the languages to English and French, but removed the language selection. As a consequence of this, the game cannot be played in French on DSi or 3DS systems that are not European or North American.

The game will freeze at the first time gate if it detects that it is a bootleg copy. This Anti Piracy measure is exactly the same as the one used in the SNES version.