Chrono Trigger is a well-known RPG featuring excellent graphics and music, and a plot focusing on time-travel.

There are six unused enemies hidden away in the game's code. Most of them are still present in the sense that they can be seen normally, but only through hacking can they be fought. Most also feature either a very basic script (usually just repeatedly attacking), or no script whatsoever. 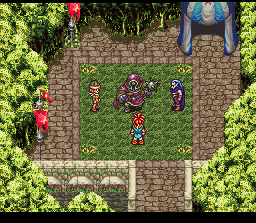 Though its name is similar to the "Omnicrone" enemy, this one is different. It uses the same magenta palette as Spekkio's fourth form, but is graphically glitched in battle. In-game, it appears in the Ocean Palace to summon a few enemies, but flees before the battle begins.

An Ogan with a blue palette. While two of them are encountered in Ozzie's Fort, neither is actually fought since Ozzie springs them as a trap on conveyor belts...which lead to pits. 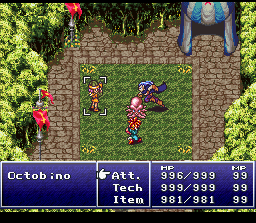 This enemy looks identical to the Octoblushes encountered in Heckran's Cave, and appears to have all the same attacks. Its purpose is unknown, but it may have been intended to be a "henchman" in a boss battle. 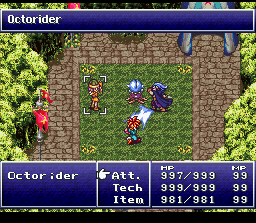 A Blue Imp riding an Octoblush. In the prototype, these can be seen at Heckran's Cave, which is where they'd likely be fought had they not ended up cut. In the final, the only place to see one is in the secret "Developers' Room" ending. 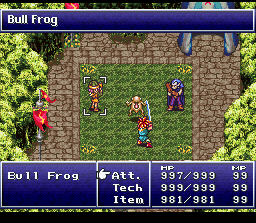 These are the two mouthy and cowardly frogs seen periodically throughout the Sewer Access in 2300 AD. Since you never technically meet them, obviously, you never fight them. 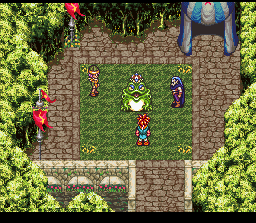 Cyrus and Glenn fight this guy during a flashback. It's otherwise never even encountered, much less fought. Like the Omicrone, it's rather glitchy in battle. 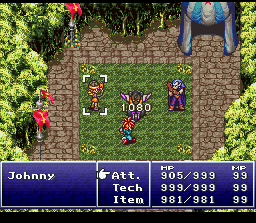 Or as he's known to his robot lackeys... THE MAN! Evidently, he was supposed to be fought at some point. Unlike the other unused enemies, he appears to have actual stats, but still does nothing more than attack.

In a normal game, challenging Lavos regularly (by completing the Black Omen or using the bucket at the End of Time) pits the player in a sort-of boss rush mode where they have to beat bosses previously fought on the adventure, from the Dragon Tank up to and including Giga Gaia, before continuing on to the actual Lavos Shell battle. A few unused enemies programmed in the game suggests the boss rush was originally intended to drag on a bit longer:

None of these enemies have a battle script programmed in, so they do nothing until you successfully defeat them.

While the developers were generally fairly good about making sure all areas were used or deleted accordingly, a few unused maps still remain. 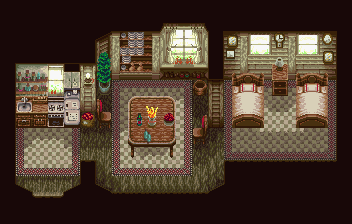 An extra house located in the same map as the Choras Inn. This is actually present in the prototype, but despite existing in the final (unlike many prototype maps), there are no longer any pointers or events associated with it. 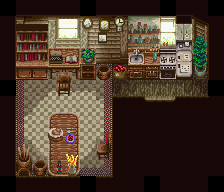 This small house is never used, not even in the prototype, and it's unknown where it even could have been located, as it exists on a single large map used for numerous building interiors in Truce, Porre, and Medina. It's slightly glitchy in appearance, due to several black boxes surrounding it, overlapping some of the wall tiles. 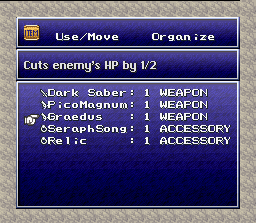 There are five unused items in the game's code.

While all of these items are also in the DS port (some renamed), they're just as unused there and are not included in the in-game item list. Also, of these items only the Dark Saber and PicoMagnum are in the prototype; this means that the Graedus, Relic, and SeraphSong were added later, but inexplicably still left unused.

Famously, two songs appeared on the Chrono Trigger OST but were not used in-game (although they still remain in the game's code). There also exists a third, lesser-known unused song.

Just as the name suggests, this was intended to be a secondary normal battle theme. The prototype used it in the Cyrus vs. Frog King flashback, although not in any actual playable battle. It was later used in the DS port for the monster arena.

This beautiful song, possibly imitative of Joe Hisaishi's "Laputa: The Castle in the Sky", is more or less all that remains of a scrapped prehistoric dungeon, an unfinished version of which is present in the prototype and indeed uses this song. It was also later used in the DS port for one of the Dimensional Vortex dungeons.

This song isn't on the OST, and as such was only named later. It's just a short fanfare, the melody taken from the traditional "Shave And A Haircut", possibly intended to be used when you talked to Yasunori Mitsuda in the Developers' Room ending. The song appears under this title in the PSX and DS ports, but remains unused aside from its appearance in the in-game music test.

There are several bits of text for world map location pop-ups that exist in the game, but don't correspond to anything.

There are a few effects on weapons that are not used within the game.

The opening copyright does not appear in the Japanese version. It is simply a black space.

The "Item" menu marker is darker and more rounded in the American version.

The "Technique" menu marker was changed to read "TEC" in the American version. It was also changed from a tan color to an off-white.

The "cursor memory" icon on the options menu was likewise translated. A thin border around it was removed, and the word "ITEM" was enlarged and re-colored.

The element graphics used on the menu weren't so much "translated" as "completely redrawn from scratch". Of note is that in the Japanese version the Lightning element is 天 (ten) which translates to Sky or Heaven.
The English versions are considerably larger and more elaborate than their Japanese counterparts.

The era markers that pop up on the world maps were in the opposite order, placing A.D./B.C.before the year in the Japanese version. Interestingly enough, both are incorrect, as A.D. precedes the year while B.C. follows it. The boxes themselves also appear to have been flipped horizontally. Also, note the existence of the 1999 A.D. marker, which actually appears and functions normally if one accesses the 1999 A.D. overworld map via hacking. It is otherwise unused.

In the Japanese version, Marle's real name is the one given to her plus "-dia/ディア" at the end (Marledia by default). In the English version, her name is always Nadia.

In the Japanese version, Ayla and Kino's dialog (as well as the name of the "Crono special" meal in 1000 A.D.) has unique code to specifically shorten Crono as a nickname ("Cro" by default). This is lost in the English release.

An in-game depiction of some official art is absent in one of the endings in the American version. It is the regular ending that occurs if you finish the game with Crono dead and the Epoch crashed. The DS version restores this with a higher quality image. 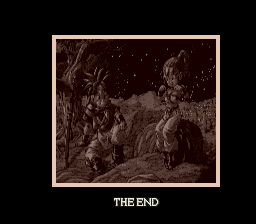 The name of Lucca's mother in the Japanese version is apparently "Lala" rather than "Lara". This has significance with the button input during a sidequest.

The Mammon Machine boss has no fadeout when defeated and will simply disappear. This is a bug introduced in the American version; in the Japanese version, the Mammon Machine uses the proper boss fadeout.

This glitch has some different effects between the English and Japanese versions. Most notably, the English release makes characters unable to equip swords and fists, whereas the Japanese version disables bows and arms. Via this method, every character can use the immensely-powerful Bronze Fist (among other side effects), which is normally only available to Ayla naturally at Level 96. 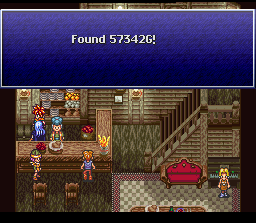 For reasons only known to the developers, the chest behind the counter in Truce Inn, quite unlike every other "behind the shop counter" chest in the game (and most RPGs in general) inexplicably contains a whopping 57,342G. This chest can't be reached without cheating, however; it was likely used for debugging purposes. It also exists in the prototype.

There are four instances in the game where there are treasure chests hidden under floor/wall tiles, which can be viewed by disabling graphic layers on an emulator. They're just graphics, however, and don't contain anything. Why they're there is a mystery, although most are probably remnants from earlier map designs. 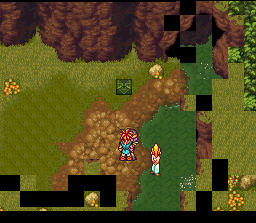 The first one appears near the entrance to Mystic Mountains. There's some speculation that this chest would have held the unused Dark Saber, but due to the sword's power and the chest's ease of accessibility, this is exceedingly unlikely. This chest was added sometime after the prototype. 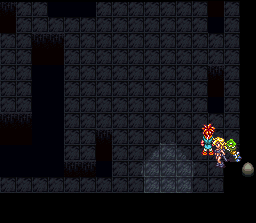 The second one appears in the "warp room" in the Tyrano Lair, buried under a wall in the lower-right corner. There's really no good explanation for why this one is here, but it's also present in the prototype. 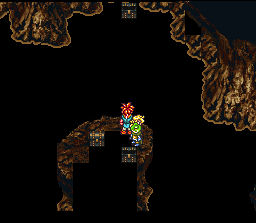 The third chest is on the raised platform in the center of the second area of the Sunken Desert. It's right next to another chest, however, so it was probably going to be used. 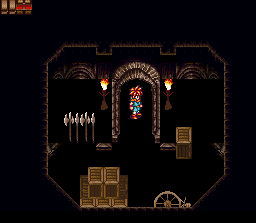 The fourth and final instance of odd chests is in the western tower of Guardia Castle. Go up one flight of stairs and disable the background layer to see them way up in the upper-left corner. 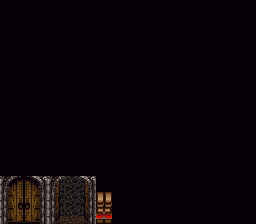 Examining the map data reveals that there's actually another set of these chests in the lower-left corner of the map. This may indicate they are intended to be used for tile swapping, similar to how doors are commonly handled. Neither of these sets are present in the prototype.

In the back of Zeal Palace, there are three doorways. While the right doorway leads to another two doorways (one of which goes to Schala's room), the left and middle doorways lead to rooms with a flight of stairs going up. Removing Background Layer 1 with an emulator reveals that these stairs were originally meant to be carpeted.

This may have been a programming mistake, since there is carpet leading to the stairs and from the stairs that the missing piece neatly fits between. Also, the previous room in the palace had carpeted stairs, so why remove it from these rooms?

These carpet placements can be seen normally in the prototype, albeit with a different palette.

This string can be found in plain ASCII text in both the Japanese and US versions. The people responsible for the design of the bike race are credited in the game's ending for map design (Mami Kawai, Kaname Tanaka, Akane Haruki, Hiroto Yamamoto) and character graphics (Tazuyo Inukai).

This string, on the other hand, has only been found in the Japanese version. Like the above, it's in plain ASCII and be found in the ROM at 0x30078.

Found at 0x310C0 is the following string.

Since the party is locked to three active members for a vast majority of the game, the maximum amount of party members that can be seen on the reserve sub-menu is four. However, if the game reduces the active party's numbers, the game's coding can allow for up to six party members to stay behind.

There is a single situation, late in the game, where the player has access to all seven characters, but during that time, the party is locked and the Warp menu can't be accessed, hiding this otherwise unused menu functionality.