Nearly all the scanned images and the prism card translations are provided by the Chrono Compendium.

This is the absolute earliest footage of the game - the infamous "weird overworld" proto shown in a V-Jump Preview VHS video from 1994. The game is clearly in a much earlier state than the the dumped prototype, and was before the decision was made to move the game from a 24MB cartridge to a 32MB one. 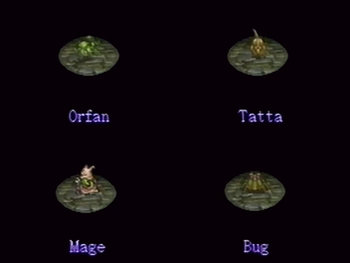 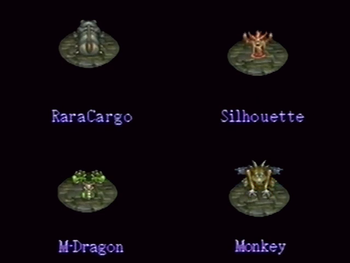 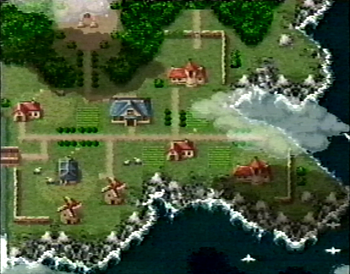 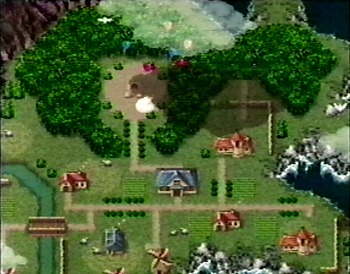 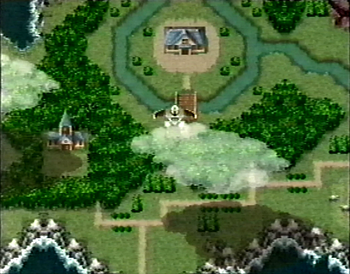 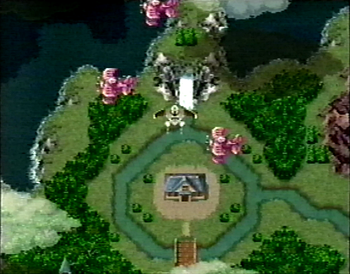 After the presentation, during the developer interview the party ( which includes Crono, Ayla, and Robo) moves around on the overworld on the projector. Unlike the final game, the map is much more spread out and individual houses are separated rather than placed together in a village block. This area may be an early iteration of the West Continent, as there is a cathedral in a forest clearing west of the large diamond-shaped lot with a blue house, similar to the final map's placement of Manolia Cathedral relative to Guardia Castle. As they pass near a bridge, a location name is shown very briefly. The hiragana appears to read as おもかげ, "remnants", but the kanji at the end is too blurry to decipher. The interesting thing here is that not only is the overworld functional enough to have location names and overworld sprites, but the bridge is also programmed with entrances on both sides much like Zenan Bridge. This is also the only real instance of in-game text in the entire presentation, barring the probably-simulated battle sequences.

Later, the Epoch is shown flying over even more land on this overworld. A mapping of this overworld is provided below, using footage from the presentation along with higher quality magazine screenshots when available:

During September and October of 1994, many screenshots and mock-ups of this early version of Chrono Trigger were released in various magazines. Since many of them are the same, they'll be consolidated and discussed in this section for ease of access.

A second video by V-Jump was released in 1995, shortly before release(?). This video contains footage of a version of the game that is clearly not the final, and seems to predate the available prototype.

The video can be downloaded here.

A promotional video used in stores as b-roll, showing another version that is potentially slightly earlier then the known prototype.

The removed Sealed Pyramid dungeon is shown, with some differences. Two staircases connect with the panel to bridge the two walkways, the large decorative floor designs are not present along with the nonfunctional chest, and a panel to the upper-right walkway is present.

Pre-release merchandise that happened to have (relatively) high-quality images of game mockups on them. 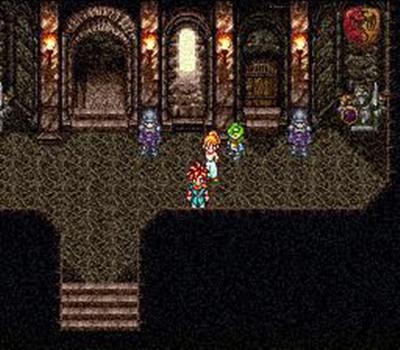 Unknown source, possibly a mockup. This depicts the two-stairway version of the southeast corner of Guardia Castle, which only exists in 1000 AD after you finish the Rainbow Shell sidequest...except here it's in 600 AD. There isn't supposed to be a door here, either.

A preview taken from a Brazilian magazine. Notably includes a new 2300 AD image, but also has one of the only instances of a primitive menu screen! This displays Crono with what appears to be four elemental symbols with values assigned to them. What they were intended for is unknown.

Earliest proto. The center screenshot is new and depicts an early sprite for Schala and Janus at a primitive Mammon Machine in the Ocean Palace (?!). Most likely a mockup. 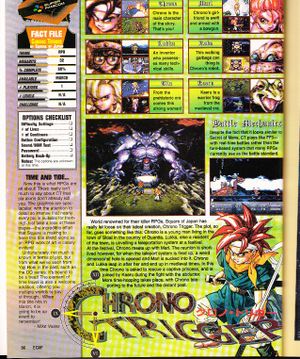 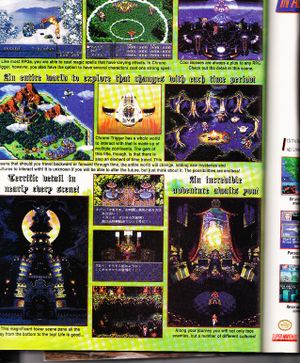 This EGM2 preview uses mostly the mockups used on the Prism Cards mixed with several new ones. The version depicted seems to be earlier than the dumped prototype but later than the build seen in the first V-Jump tape. For example, in the Dragon Tank shot the menu is using a very long status display not seen anywhere else. The first image in particular claims Crono is from the town of "Stoal" instead of Truce.

The second image is even more interesting, showing a newer, unfeasably compact 1000 AD overworld, a scene showing the Arc Impulse triple tech in a snowy mountain area (which may have been the inspiration for the Toriyama cover artwork or vice-versa), and three new screenshots. These show the Telepod scene (with what appears to be a slightly different Taban), one where the party speaks to a Goon enemy in Manoria Cathedral, and a bizarre Earthbound Village mockup.

The upper-right screenshot on page 2 also shows a bizarre fight with a completely different, larger Queen Zeal, while the upper-center one shows another triple tech mockup. It doesn't look like Twister, the Crono/Robo/Ayla triple tech in the final, nor does it resemble any double tech of Crono/Ayla's - especially considering Robo's command window is open!

Everyone's heard it as Frog's Theme plays an important part in the game, but the Official CD soundtrack actually adds a short intro to it, which sadly isn't to be found in the game data. This intro can also be found on the official Spotify release of the soundtrack, where it, along with the rest of Frog’s Theme, can be listened to under the name of Bonus Track 5. After carefully studying each byte of the song data, though, there actually seems to be leftover bytes which don't serve for any purpose - unless we actually begin to patch the note data from the intro part back in!
Namely, the extra data found is Volume, Panpot and Octave definitions on the main melody channels (Flute and Trumpet), and that's what inspired me to reverse engineer the audio from the OST back into the game by hand. The only big thing missing seems to be the correct Pitch LFO values for the Trumpet melody. Flute channel's LFO values seem to be close enough though and other music tracks use very similar values as well, so I copied them in as is.

Note - while the SPC data here is 100% compatible with the game (and needing only minor additions to the game code alongside), it doesn't fit into the sound bank without overwriting other songs.