An interesting theory. It certainly does resemble 鳥 in a lot of ways... In any case, it would be a good idea to have maps of all of the different versions of the map in a gallery underneath it. --

Actually, there *aren't* any different versions of that map. They all look exactly the same; the only difference is that some of them feature NPCs and other "event" data, while others are completely empty. -YK

That would be what I meant, yes. It has different entities, so it's a different version of the map. :P --

I'll see what I can do, but while it's very easy to rip *maps* with Temporal Flux, event data is another story. Plus there're dozens of these maps... If someone else wants to check all these, great. If not, I'll mess around with some stuff, though that'll have to wait until after I find and rip some other stuffs. =P -YK

It's not high-priority, obviously. Also, really need to make a few hacks to make {{bob}} able to do prototypes too.

Well, there's *technically* one variation of it, but it just uses the 12,000 BC "Cave" tileset, resulting in a rather glitchy appearance. I can rip *that* if you'd like... -YK

I haven't quite gotten the hang of how vSNES works just yet, although admittedly I didn't experiment too much yet; keep in mind, I'm still learning about how to dissect games. I *did* notice something odd when comparing the tilesets of the prehistoric era between prototype and final, though. Namely, the Singing Mountain was removed from the final's tileset, despite not being *replaced* with anything. There's literally just a lot of blank space where it was. No idea why *that* was cut, but the coliseum in the 2300 AD tileset survived to the final. Also, I discovered, both in the proto and final, there are some weird "sub-tiles" in the prehistoric map tileset that appear to be stewpots, firepits, etc. No clue how to bring them to the surface, though. -YK

Actually, I should note that the big problem I have is, again, palettes. I honestly have *no* idea how to load the correct palettes. For *anything*. -YK

Hm. Never mind. I seem to have figured *something* out. I'll keep experimenting. -YK

For palettes just add the palette window and click on a color. For general VRAM, make a save state in the menu/area/game mode where you want to look. --West 03:12, 15 August 2010 (EDT)

Another way to get palettes in vSNES is to go into Scene Viewer and hover the mouse pointer over the objects. This is helpful for getting the correct palettes for both background tiles and sprites. -- 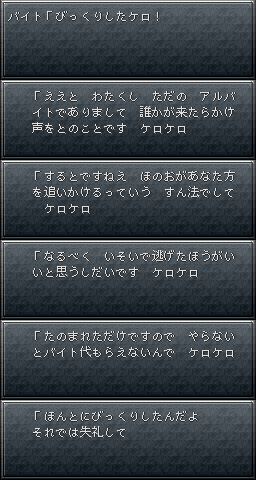 This is the text when you first speak to the frog in the basement area.

Displayed if you get caught by the fireballs. 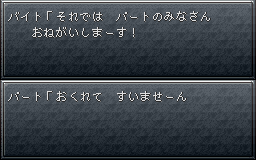 Said by the frog in the extra room, just before the battle. 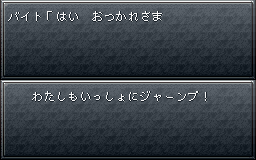 Said by the frog at the exit to the extra room, after winning the battle.

If you talk to the frog after getting caught by fireballs once, it says this.

Translations would be most appreciated. -YK

Really quick attempt at translating. Quick, and probably painful. And yes, I'm willing to admit it could be wrong, in places.
Note: As I'd looked at these slightly out of context (translating from these images of the dialog boxes rather than the actual scenes (not to mention it's been eons since I played the Super Famicom version)), I wasn't sure how to resolve certain things, like the mention on the main Proto page that just talking to the frog sets the fireballs after you. Or whether or not there really are just two different frogs. So, this is most likely going to be revised and improved, at some point... hopefully. If anyone else wants to make corrections, even better.

The names バイト and パート seem to simply refer to worker status rather than actual character names (バイト (baito; from アルバイト from German "Arbeit". Came to mean part-time only, however.): part-time work, so I'll just use 'employee' for now. パート (part): is probably a part-timer reference, as the text seems to indicate.

Employee: You surprised me, kero!

"If you don't, the flames will chase after your party. Those are the rules, kerokero."

"You'll want to get away from them as quickly as possible, kerokero."

"You really did surprise me! So apologize already!"

(Basically: "Your escape's been cut off!")

Part-timers: "We're very sorry about this..."

Employee: "Good! That's it for today!"

(Basically: "Jump together with me!")

Employee: "Kerokerokerokero... I wonder how much I'll be getting paid today..."

Some additional attempts at translation for images on the main page...


"Four hundred years have passed since the Great Demon King brought about the birth of our God, Lavos. Our god's awakening is close at hand......"


"It is said that in the western mountain's cave, the demon Heckran resides, ordered four hundred years ago by the Great Demon King to protect the land where our God, Lavos, slumbers."
(assuming that cursor is actually supposed to be a "0".)


"The Great Demon King led us in the battle against the humans attacking us, four hundred years ago. When our God is reborn, the humans will not matter......"
(not sure about the last sentence...)

I'm going to try and add novel contributions and ideas here to the Compendium pages on the Prerelease to round it out in the next update, if that's all right. As usual, feel free to take everything from the Compendium and use it here. ZeaLitY (talk) 13:03, 24 December 2013 (EST)

Well well well, if it isn't my favourite person! Of course you're welcome to add anything found here to the Compendium. We'd also love it if you contributed anything we missed! :) --GlitterBerri (talk) 15:27, 24 December 2013 (EST)