Chrono Cross is the long-awaited sequel to the cult classic SNES JRPG Chrono Trigger, and a very loose retelling of Radical Dreamers, which itself was a story sequel to Chrono Trigger. It continues the story in many ways, but features a radically different gameplay system, loads of silly throwaway characters, and uses interdimensional travel instead of time travel. While the game was critically acclaimed and is generally thought of as an excellent JRPG in its own right, fans of Chrono Trigger are fairly split on whether or not it's a good sequel, largely because of the liberties it takes with connecting itself to its predecessor.

But on the bright side, it was definitely the last time a beloved cult classic game had a divisive sequel, right? Right?

Kid as a young child, as seen in flashbacks and a late game sequence.

The Dragon God. Both this and Young Kid's portrait look like they should have been used, but aren't. While both of them speak, no face portrait at all is used in their respective scenes.

Lynx after being body-swapped with Serge. Unused in favor of the regular Lynx portrait. The miniaturized version can be seen on the equipment purchasing screen, but not in full.

A placeholder portrait, with the kanji 'kao', Japanese for 'face'. 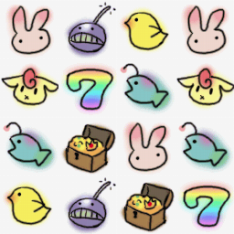 "Pellets used for throwing that are made out of bone." Bottom tier 'shot' weapon. By the time you can recruit party members who use this kind of weapon, they'll be equipped with bronze/iron/silver/stone equipment, and Bone equipment will no longer be craftable. 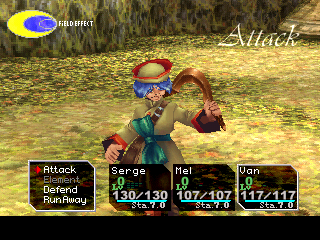 "A boomerang made out of copper." Similar to the above, the weakest boomerang accessible to the player is the Steelerang; even the initial equipment of Boomerang-wielding characters will always be steel or better if added to the party at zero stars through cheats.

"A patterned shirt with really bad taste!". A fully functional but inaccessible piece of armor which increases evasion by 50%, but has poor defense and magic defense. Equippable by men only. Some guides report that it is the rare drop of the another world version of Wraith, which is partially true: The Wraith in question does exist in the game's code, and his position in the enemy list places him in the tunnel connected to the forest under Viper Manor B; however, the version of the enemy carrying the shirt is unused.

Named Raw Material 23 to Raw Material 31. The descriptions are all the same: "Temper material for forging equipment."

To play with these yourself, enter the GameShark code 8006EC08XXXX to allocate them to the very first slot of Serge's grid. 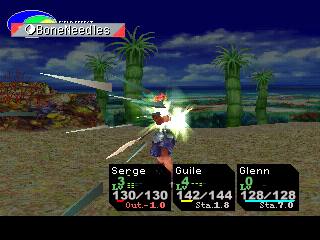 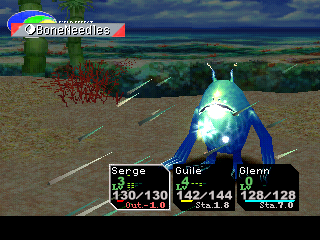 Red element. Shoots greenish and white needles at the target. Similar to NeedleWork used by Puffy and Scorpiod. 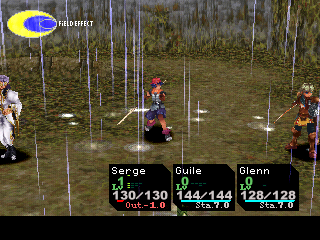 No element, using it will clear a space on the element field. Causes rain to fall, no other effect. Utilized by an unused enemy, FamilyTree. 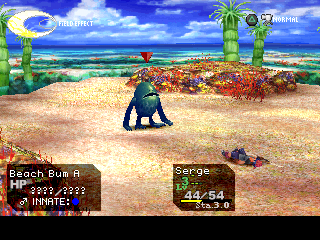 No element. Entirely different from the red FireBreath used by the Fire Dragon; the user will float around for a second, fade into some glittery particles, then just flop over and play dead, and from that point their new idle animation will be lying on the floor. If the player uses an attack, they'll run over and whack the enemy then lie back down. This is almost certainly a boss death animation (all of which are stored as elements), but one of the few which has a name. 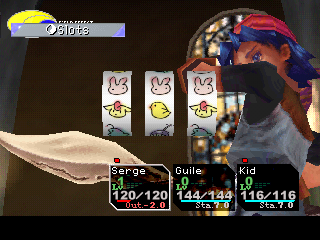 Blue element. Slot reels appear on the screen, which the player stops with the X button. The reels then fly into the camera and disappear. Nothing happens otherwise. Considering the use of player input and the theme of the attack, it probably belonged to Fargo.

No element. Crashes the game if used by the player. This is probably the effect of TerraTerror summoning Cytoplasm and Ectoplasm. 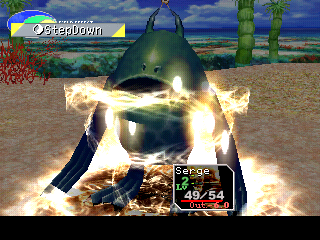 Yellow element. Some rays and spheres of light surround the target. Does nothing. 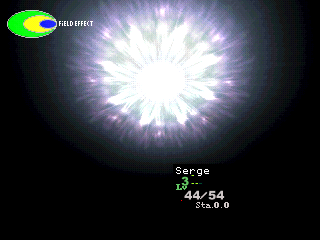 No element. Looks like the final boss's death animation. After using it, the backdrop goes completely black for the remainder of the battle. 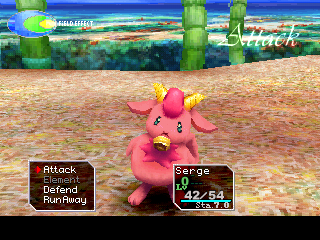 If the player uses one of Pip's transformation elements, they will permanently have Pip's model during battles, but still have their own stats. 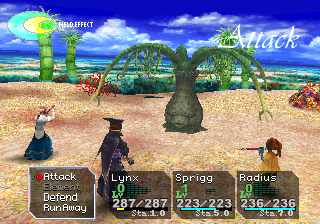 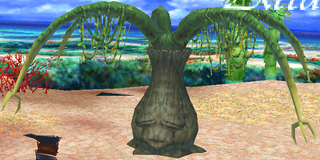 FamilyTree is an unused green elemental monster with an incomplete battle script. Based on its high HP, it was probably intended to be a boss battle in Shadow Forest B. It appears in one battle formation with four Bulbs; the Bulbs were likely suspended from its four branches. If the player encounters its battle formation through cheats, the game crashes because of its bugged script. It's the only enemy to possess the otherwise unused element, DownPour. 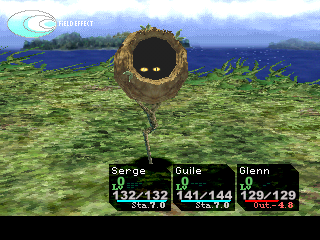 Not unused, but it has a name and enemy data, despite not being a valid target. This is the twig on top of which the enemy Loch Nest is perched.

There is a significantly weaker version of the Wingapede which is unused. It was probably intended to be encountered when saving Kid in Home World. Instead, the player must fight the stronger version encountered when traveling to Gaea's Navel. 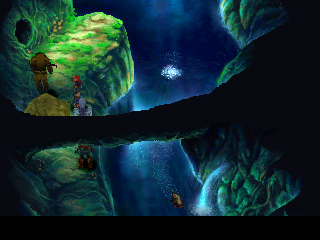 The location where the unique Wraith would have been fought.

This is the unused Wraith who would have dropped Ghetz's Shirt. Based on his number in the enemy list, he would have appeared in Viper Manor B's sewers.

The US version contains additional dialogue to clarify background information and cover plot holes present in the Japanese version.

A boot menu exists in the final game. It differs from version to version. 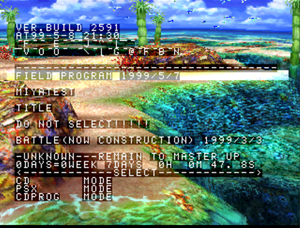