This is a sub-page of Circus Caper.

The Japanese version is based on the anime Moeru! Oniisan (Burn! Older Brother, known internationally as The Wild Burning Man). The game features levels in a different order, completely different sprite changes, and some levels have you playing with different characters. Also, the final boss (named Dra Gon) is played in an RPG-style combat system. The music was also completely redone to fit the NES version, however, the Bonus Game songs, boss songs, and game over songs, as well as various jingles were kept the same.

In the US version, the player only gets to play as Tim. However, in the Japanese version, you can play as other characters, depending on the stage. The characters are not selectable, however, and do not have any stats and are just mere graphic changes. In Stages 1, 2, 4, and 5, you play as the main character, Kenichi Kokuhou. In Stage 3, you play as Rocky Hada, who also appears in one of the pre-final boss mini-games. In Stage 5, you play as Gai Hidou, and in Stage 6, you play as Akira Shiranui.

The US version localized the sushi to a piece of pie.

Both the Japanese and US version use the same stages, but in a different order. The US version (obviously) reskins the levels to have a circus theme.

The order of the bosses was also swapped. Again, the bosses were reskinned to appropriate the localization of the US version. In the Japanese version, the bosses are known as the Horafuku Gods (ホラフク神).

Though the third boss's name could translate to Elvis and is an Elvis impersonator, the background while facing him reads "ELBIS ON STAGE".

After the player starts the game, in the first cutscene, the player must play a dice game. In the Japanese version, it was to determine whether the outcome of the dice was going to be odd (ばん) or even (ちょう), the player aiming for the opposite to roll. If the player chose the roll that comes out to the one they selected, they get a game over before even getting to play the first level.

In the US version, a clown offers the children to roll higher than him to get a ticket. However, it was reprogrammed so that you always win. The game doesn't appear to check whether the number is high enough, so the dice may be just for show. 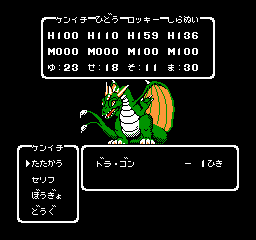 After beating the stage 6 boss, the player is brought to a few minigames before facing the final boss against Dra Gon. This battle is done in an RPG-style combat system. In the US version, the game forces you to face all the previous bosses in much weaker form. Then, it faces you against Mr. Magic, a reskin of the stage 3 boss (as mentioned above).

Some of the sound effects were also altered in the US version.

A staff roll was present in the Japanese release and was omitted from the American release.

Interestingly, the game says the name of its sound engine. The only other NES game to do so is the Japanese version of Tecmo World Wrestling.

Retrieved from "https://tcrf.net/index.php?title=Circus_Caper/Regional_Differences&oldid=848288"
Categories:
Cleanup > To do
Subpages