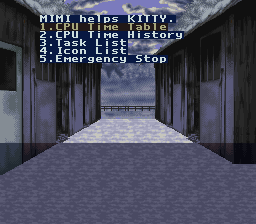 Using the Pro Action Replay code 7EE8AA01 will enable the game's debug flag. From here, you can press Select at any time to bring up the debug menu.

The menu consists of mainly technical information, rather than any features capable of benefiting the player - CPU usage information, a list of running tasks, and crash info. Pressing B will resume gameplay.

It's also named "MIMI", according to the menu and the task list. How nice. 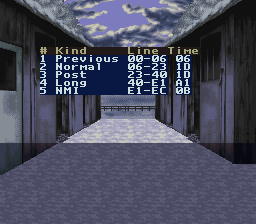 This screen shows the division of CPU usage in the most recent frame (not including while the debug menu is running, which essentially pauses the game).

The ranges and lengths of time next to each item are measured in scanlines on screen, as the SNES's scanline counter provides an easy way to measure CPU usage on a per-frame basis. "NMI" refers to the code which runs during the vertical blanking period between frames; the remaining items are unknown. Naturally, the exact level of CPU usage for each one depends on what is currently happening. 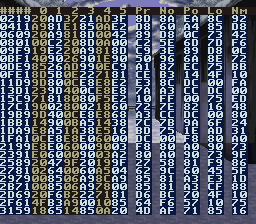 Based on the name, this screen is probably supposed to show a history of CPU time measurements taken using the previous screen. It's more or less a bare-bones memory viewer which can be navigated using the D-Pad, and for some reason, entering and exiting the screen repeatedly causes the display to begin at a different memory address each time. You can probably find some familiar numbers from the previous screen if you look hard enough (good luck, though). 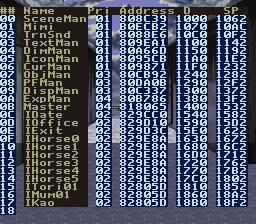 This screen shows information about which tasks the game is currently performing. The columns represent the task's name, priority(?), code location in ROM, memory location in RAM (using the direct page register), and stack pointer.

Obviously, the number and names of tasks currently running depends on what you're doing in the game, though typically rows 00 through 0B (SceneMan through Master) are always running. "Mimi" is the debug system, and is always running even if the debug menu isn't currently active (just to check if Select has been pressed to activate it).

This screen is similar to the previous one, but instead displays some information regarding graphics (or something) for each currently running tasks (except for the aforementioned "system" tasks which are always running). What each column here represents is unknown. 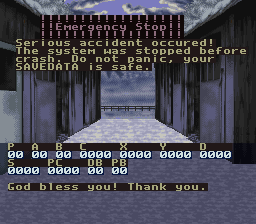 Most of the time, selecting this option will simply display "No emergency stop". However, if a fatal error has recently occurred (and been handled by the game), a crash dump will be read from RAM, and the error screen which followed the original error will be recreated.

The numbers underneath the friendly English message represent the values of various CPU registers at the time the error occurred. In the event of a crash, the developers could have used this information alongside the info on the task list screen to more easily identify what was causing the problem.

This screen can be forced using the Pro Action Replay code 7E003701 before selecting the Emergency Stop option. However, unless a "real" error screen occurred, the register values displayed on this one will all be zero. It is no longer possible for this screen to appear legitimately, as all the game's error handlers were removed; if the game were to somehow begin executing invalid code, the game will simply lock up.